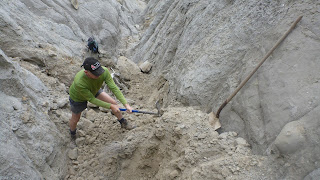 Last weekend I returned  to our fossil whale locality in Palliser Bay with John Simes, the paleontology collections manager at GNS Science. This is where I had found three large jaw bone fragments of a fossil baleen whale last November. 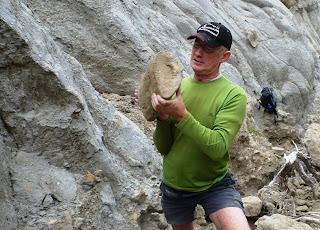 We decided to have a good look through some of the loose debris in the area where I had already made some finds.
After some time. John spotted another large piece of mandible, very similar to the ones that we had from the previous visit. 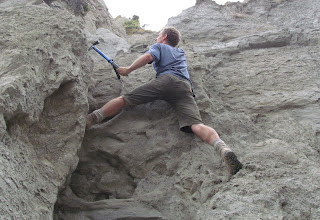 I decided to try the direct route up the cliff, to get closer to the source of the bones. The ice axe proved to be quite useful for making progress up   the very crumbly mudstone. This got me about half way up the gully, to a point that I had reached last time and where I had found one of the three original bones. On this first re-inspection I didn’t come up with any more fossils. 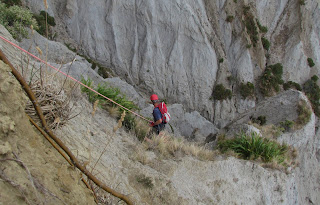 The next plan was to abseil down into the gully from the top, in order to have a very close look at the steep headwall which seems to be the actual source of the fossil whale. I had to take care not to dislodge any large rocks with the rope. Unfortunately this inspection of the cliff didn’t reveal anything even with careful scrutiny. 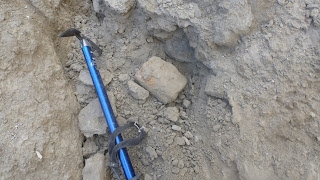 Back in the bed of the gully, I dug around with my ice axe some more and did at last come up with three smaller pieces of bone. Here you can see one of them – we think it is the end of a jaw bone, although it is much thinner than the other pieces. 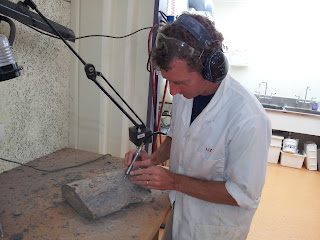 Back in the macropaleontology lab at GNS Science, the thin layer of mudstone coating the bones was quite easily cleaned away with the help of a pneumatic air scribe. The 30 cm long piece shown here turns out to fit perfectly with the previously found  segments of the mandible, giving us a combined total length of 1.5 metres for it. 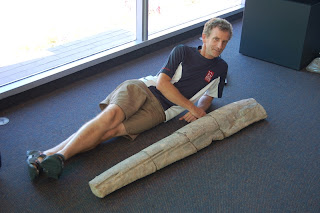 The missing link puts it all together. The latest piece in the puzzle is second from right. The rest were found on the previous trip. 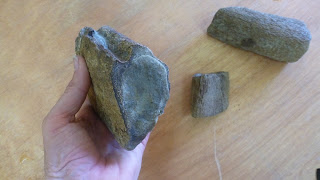 Here are the smaller pieces after a bit of cleaning. It is tantalising to think that there must be a lot more of them waiting to be discovered in the mudstone of Palliser Bay.