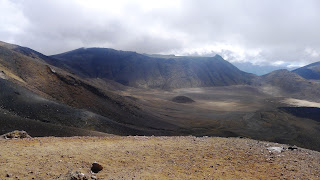 Earlier this week I decided to spend the night camping up on the North Crater of Tongariro. This is the large flat crater that is off to the north and west of the main track of the Tongariro Crossing. For access information have a look at the GeoTrip page here: www.geotrips.org.nz/trip.html?id=279
Here is a view across to it from near to the Red Crater: 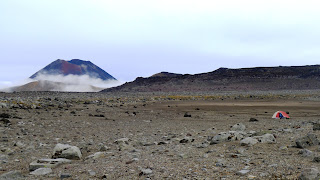 The crater is about 1 km across, and is believed to have once been a lava lake several thousand years ago. In the distance you can see the crater rim to the right of the cone of Ngauruhoe. The surface of the ground is uniformly covered with scattered blocks of lava. This windswept area feels isolated and rarely visited, even though it is so near to the Tongariro Crossing track. 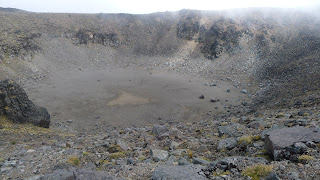 There is a spectacular explosion crater within the North Crater itself, over 300 metres across and about 50 or more metres deep. It has broken through and partly obliterated the surface of the solidified lava lake. 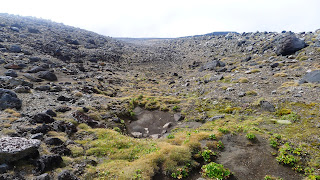 A low angle valley cutting across the main crater represents the line of a fault. Debris from the explosion crater to the left of the image has partly filled the valley. 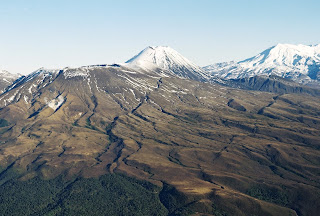 This photo taken by Lloyd Homer in 1984 shows two more faults (dark lines) crossing the slopes on the western flank of Tongariro. They are normal faults, indicating extension of the crust that is associated with the volcanism in the North Island. They have been active since the Taupo eruption 1800 years ago 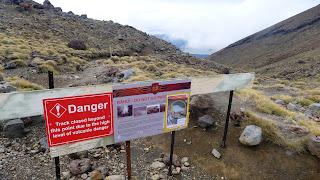 The Tongariro Crossing passes just below and east of North Crater. There is a barrier prohibiting closer access to the Te Maari Crater / Ketetahi area  . This is the 2 km exclusion zone due to continued volcanic eruption hazard. 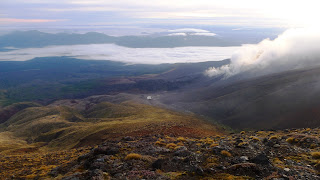 From the edge of North Crater, there is a view down to Ketetahi Hut and across to Upper Te Maari. It is sobering to think that the hut was damaged by large flying rocks erupted from Te Maari about 2 km away during the August eruption. If you click on the image to enlarge it you can see the hut near the left side of the photo. 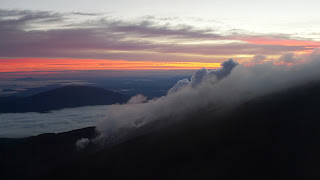 This was the view at sunrise, looking down on to the steam plume coming from Upper Te Maari.Crater.