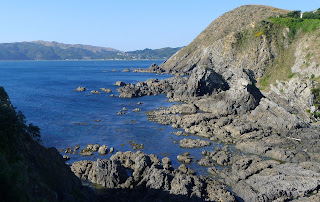 Titahi Bay is a great place to visit if you are interested to see some of the geology near Wellington. There are a number of very interesting features to look at and explore. The first thing to check out is the coastal landforms caused by a combination of the atmosphere and  the sea, as well as the variable resistance of the rock, and a history of earthquakes (uplift). The first image is taken from the Pa site, a few hundred metres north of Titahi Bay beach. 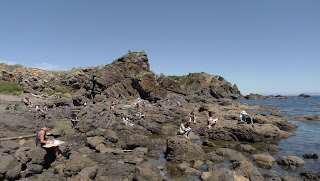 If you are a teacher, this is an excellent place to encourage your students to observe some of these natural features, such as sea caves, sea stacks, arches, marine terraces and wave-cut platforms. There is more information about how these features form on coastlines generally on the GNS Science website 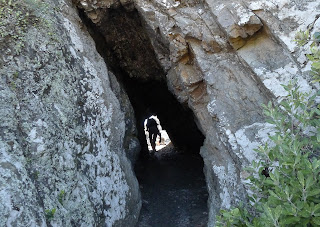 You can also have a look at this GeoTrips page for specific information if you would like to visit this area.

This sea cave marks the line of weakness of a fault. It is no longer at sea level, having been uplifted out of range of the water by earthquakes. It is also a useful way through the rocks between two small embayments. 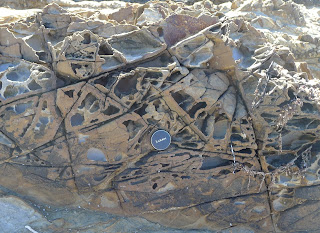 Having looked at the erosion and weathering features along the coast, the next thing to do is have a look at the structures and the rocks themselves. A good place for this is just south of the Pa site, accessed down a short very steep track from Terrace Road.
www.geotrips.org.nz/trip.html?id=69 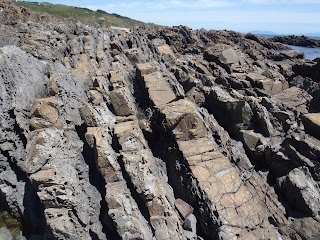 In this photo you can see that the rocks are made up of alternating bands of massive sandstone, with in-between layers of dark mudstone. These rocks were formed from sands and muds eroded from the margin of Gondwanaland, long before New Zealand existed. The material flowed down into the deep sea and settled over wide areas. The coarser sediment, at the base of each of these submarine landslides, is represented by the sandstone, whilst the mudstone gradually settled on top. 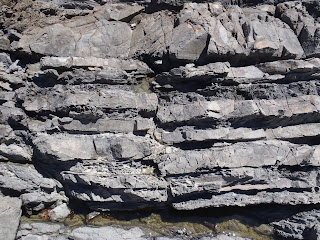 After deposition, the sediments were squeezed and deformed by the bulldozing effect of plate collision along the edge of Gondwanaland. You can see how the originally horizontal layers are now  almost vertical at Titahi Bay. Many faults are easy to spot, as they displace the clearly defined rock layers. 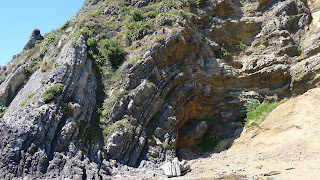 As well as faults there are also folds in the rocks such as the anticline (upfold) shown here. 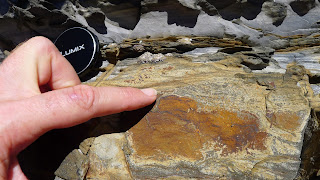 An interesting challenge is to look for sedimentary features such as graded bedding or cross bedding, in order to tell the direction of younging of the steeply tilted rocks.  In this photo you can see some cross bedding, showing where the rock above my finger cuts across some fine layers that must have been layed down first. 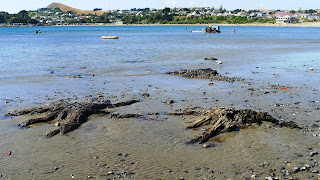 If you have time whilst at Titahi Bay, and if the tide is out, you should have a look at the tree stumps of the fossil forest which are sometimes exposed, usually at the south end of the beach. It seems almost unbelievable that these wooden stumps date from a time before the last ice age, about 100 000 years ago. The fossil forest does actually extend right along the beach, but is mostly covered with sand. On rare occasions, about once a decade, storms clear the sand away to expose much more of the forest than you can see here. 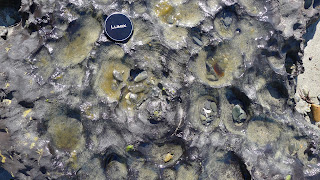 Look carefully and you can see the growth lines of these ancient tree stumps.