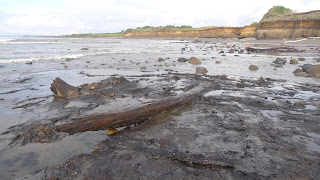 Earlier this week I was up in Taranaki, exploring the geology of the area  with two GNS Science researchers Kyle Bland and Richard Levy. One of the sites we visited was Airedale Reef, a short walk east along the coast from the mouth of the Waitara River. There are spectacular remnants of an ancient forest on the shore platform at low tide, with tree stumps in growth position and large logs sitting in a black layer of peaty soil. 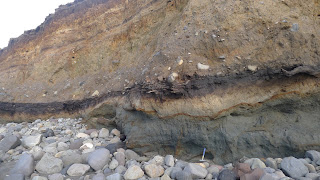 The forest layer reappears at the base of the nearby sea cliffs, with the roots and tree stumps gradually being eroded out. Just below the dark layer is an olive green bed of dune sands. The carbon rich forest layer is thickest in the depressions between the dunes. 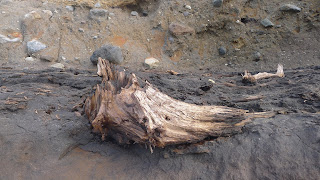 This  is one of the tree stumps emerging  from the cliff. But how long ago was this forest still living? How did it die and why was it preserved like this? The answers are in the layer just above it. 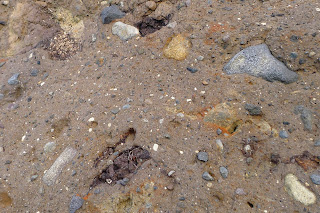 This overlying layer is made of an unsorted mixture of different boulders and less coarse particles of rock. You can also find chunks of carbonaceous material scattered within the layer that must have been ripped up into it as it was emplaced. This 4 metre  thick layer of material has been mapped  over a minimum area of 255 km2 around north Taranaki, and has a total volume of at least 3.6 km3. 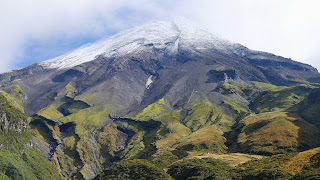 It is believed that Mount Egmont (Taranaki) volcano is the source of this layer. Like some of our other andesitic volcanoes, Mount Egmont is made up of layers of unconsolidated volcanic deposits interbedded with more massive lava flows. Because the slope angle of the volcano is very steep, the cone is inherently unstable, resulting in occasional enormous avalanches of debris launching down the mountainside, spreading across the surrounding countryside and out into the sea for distances of up to 40 km from the source. For this reason Egmont is a significant geological hazard that is monitored by GeoNet. 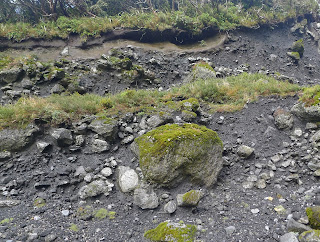 On our visit up the  mountain the following day, amidst the lava flows and ash layers we could see deposits such as these – not too different from the bouldery layer at Airedale Reef, although likely to be much younger. 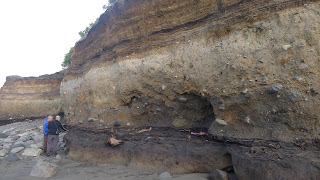 Back at Airedale Reef this photo shows a good view of  the layer that buried and destroyed the fossil forest. It is known as the Okawa debris avalanche deposit and has been dated at about 100 000 years old. This means the forest was growing during the last interglacial period. Pollen analyses shows a dense podocarp forest, but lacking specifically coastal plants. It seems that when the forest was alive, the coast was further out than its present position.

There is a lot of pollen preserved in the Airedale Reef cliff section. Scientists found over 10,000 pollen grains per cm3 in places.They were analysed to study the plant communities from the period of time represented by these layers.

This allows research into climate variations through time, as different species appear and disappear up through the cliff section from the base to the top. The Rimu and tree fern species in these two images indicate a lush podocarp forest that grew in warm, wet conditions. In the next layer above, the species found represent a sub-alpine shrubland community that grew in a cooler climate. 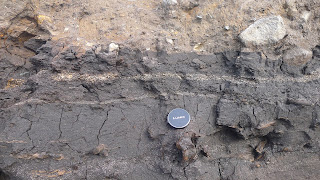 In this photo you can see two pale coloured tephra (volcanic ash) layers near the top of the carbon rich layer, showing periodic eruptive activity from the volcano. 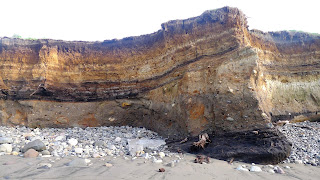 In the last image you can see that another carbon rich layer formed in a depression at the top of the Okawa Formation (centre left). Above that the rest of the section is made up of orange and pale brown soils.