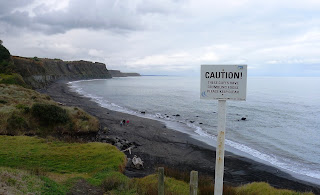 The South Coast of Taranaki near Hawera has extensive rocky beaches lined by high crumbling cliffs. It is a great place for geology, but you should be wary of the potential for cliff falls, especially after rain. This is the view east from the Ohawe beach access point. 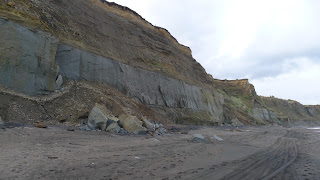 A first look at the cliff from a safe distance shows that it is made of two main rock types; massive grey muddy sandstone at the bottom, with darker brown soft stratified layers above. The boundary between the two layers is very distinct and can be seen for many kilometres along the coastline. 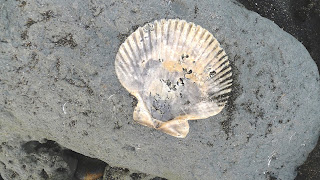 If you take a closer look at some of the muddy sandstone boulders lying on the beach, you can find some nice fossils such as this scallop. 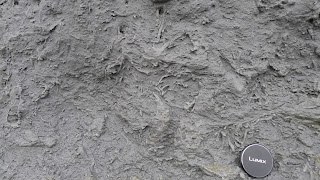 In places these rocks are very bioturbated. In other words they have been churned up by organisms that burrowed through them when they were part of the sea floor. 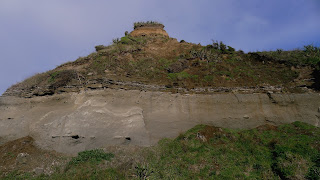 For a close up look at the boundary between the two layers that form these cliffs, a good place to go is the beach access track 4.5 kilometres east at Waihi Beach (end of Denby Road see www.geotrips.org.nz/trip.html?id=55 for location and geological info). There, right before you reach the beach, is an easily accessible outcrop where you approach the boundary safely. 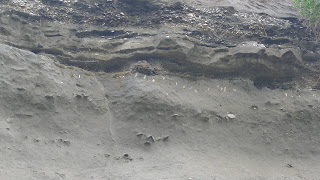 Here is a slightly closer view – you can see the change from the lower grey unit containing oysters and scallops with the shell rich layers above. The fossils in the lower unit indicate an environment of deposition about 20 to 50 metres deep. This layer is approximately 3.5 million years old. 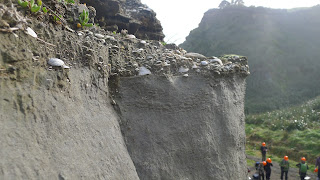 Here is another image where can see the incredibly abrupt change from the lower muddy sandstone to a much looser sandstone packed with shells. 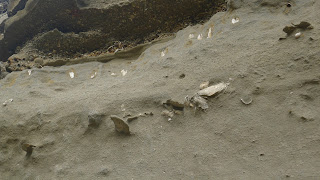 Just below the boundary there are some vertically positioned shells in a line. These have burrowed down into the sediment from above and have been preserved in life position. Although they are found within the 3.5 million year old sandstone, they are actually only as old as the overlying shelly layer, which is about 125 000 years old . 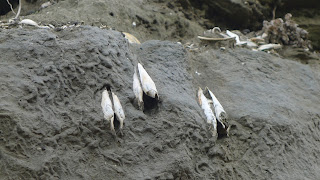 This means that the 3.5 million year sea floor sediment has been uplifted, eroded down to sea level, and then covered with shelly beach or estuarine deposits of much younger age. Nearly three and a half million years are missing from the sequence. 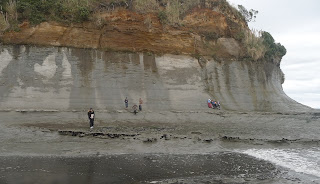 Interestingly the same unconformity is widespread across Taranaki. Here you can see it at Wai-iti Beach on the north coast. Here the time gap is even greater, as the underlying grey sediments are about 8 million years old and represent deposition at about 500 metres water depth. This shows that there has been greater uplift and erosion in the north compared to the south Taranaki coast.


Here is a video of Kyle Bland explaining the Waihi outcrop and the story revealed by fossils: