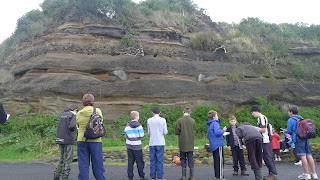 Another great geological venue on the South Taranaki coast is at the Opunake boat ramp, where we took our Geocamp participants recently. On two sides of the car park there are cliffs showing a spectacular sequence of strata.
information for you to visit this spot is on our GeoTrips website here: www.geotrips.org.nz/trip.html?id=56 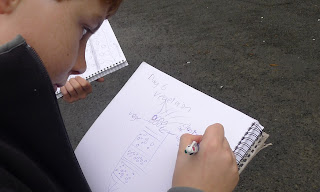 It’s a perfect spot to practice drawing a geological section and making detailed observations.
Drawing is very valuable as it forces you to be careful and attentive to details.

The observations lead to the next question. What can these rocks tell us about the processes that put them in place? 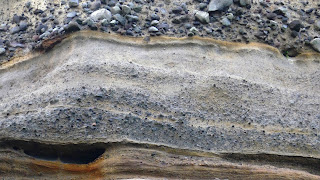 These colourful orange, grey and yellow bands contain numerous volcanic clasts (pebbles and boulders) suggesting that they have originated from the Taranaki / Egmont Volcano, an obvious source about 25 kms north-east of Opunake. Generally when you see stratification in a rock it suggests that it has been laid down in moving water (or from the air in some cases such as volcanic ash layers or sand dunes).  This layer shows well developed graded bedding – the larger particles were laid down first, followed by finer and finer material. The very coarse unit above indicates another very high energy phase of deposition. 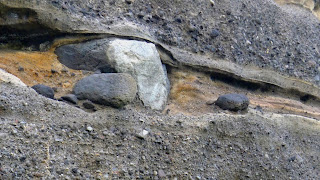 In some places you can find very large boulders that have been deposited and left in scoured out hollows that have then been infilled with finer material. 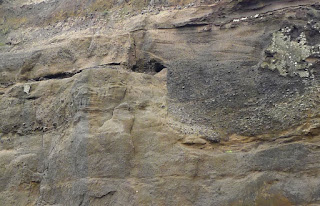 In  this image you can see a channel on the right of centre that has cross cut the horizontal layers and been infilled with gravel. This also shows that the sedimentation process was occurring in a high energy environment.

So a fair interpretion of the Opunake sequences is that of volcanic material that has been eroded off Mount Taranaki and deposited in a fluvial (river) environment, possibly as reworked lahars or debris flows that have been mobilised by floods. 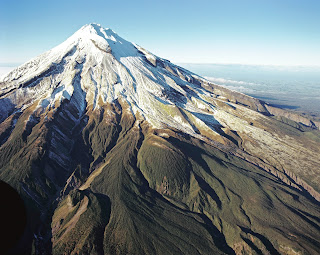 If you take a look at the landforms on the slopes of Mount Taranaki, you can see numerous gullies and larger valleys where the rocks have been eroded away, either by rivers, lahars or rock slides. Occasionally there have also been the massive debris avalanches such as the one that covered the forest at Airedale Reef)   Over time the mountain has produced the material that blankets hundreds of square kilometres of the surrounding plain. 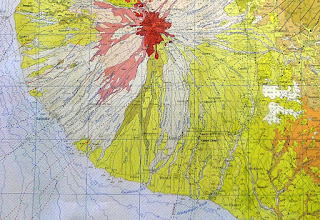 Here is the geological Qmap for Taranaki. The red rocks are volcanic lavas and related rocks centred on Taranaki / Egmont Volcano, whilst the pink rocks are pyroclastic and debris flow deposits.
Opunaki is on the coast  half way up the map on the left.

You can see the profound effect of the volcano on the landscape, as it is at the centre of a radial arrangement of volcaniclastic deposits.  The volcanic rocks have been  spread across the landscape for large distances by the power of gravity and water.