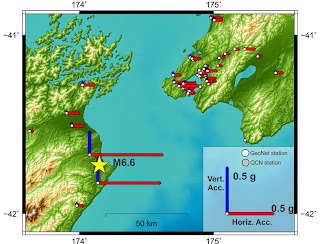 The recent magnitude 6.5 Cook Strait and  6.6 Lake Grassmere earthquakes were comparable in size to the ‘quakes that rattled Canterbury in 2010 and 2011.
This map of peak ground accelerations for the Lake Grassmere Earthquake shows recordings of up to about 0.75g.(or 0.75  the acceleration due to gravity). 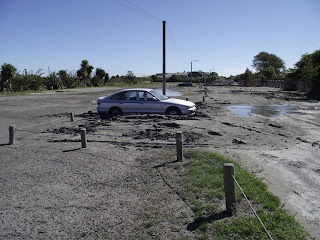 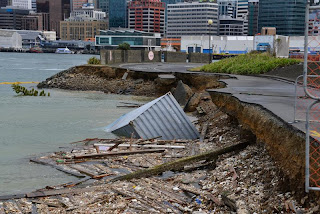 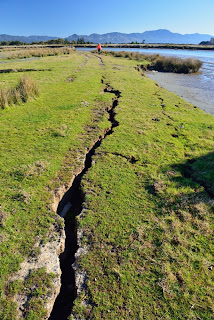 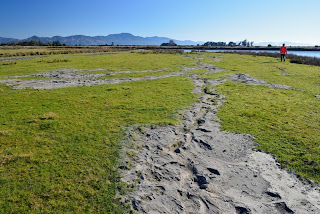 One of the notorious and extremely damaging effects of groundshaking in Christchurch was the widespread liquefaction and flooding that affected large areas in the eastern suburbs. This occurred in areas where the land was made up of soft low lying sediments by the river or near the coast such as Bexley and Avonside. (photo by Dick Beetham, GNS Science)

The most significant damage in Wellington was long the edge of the port where a large section of the road collapsed into the sea. This photo by Graham Hancox of GNS Science, shows the scene after the combined effects of the two recent earthquakes.

So what were the effects on the ground near the earthquake epicentres? Are there any areas of soft, waterlogged sediments beside an estuary or river in Marlborough that might be expected to compare with those severely damaged parts of Christchurch?
A team from GNS Science went to look at the ground damage alongside the Opawa River, near its confluence with the Wairau River. Dougal Townsend took these photos during their visit:

Near to the river, there were several long cracks created by lateral spreading.

Sand boils and sand volcanoes had left their mark over the paddocks beside the river. 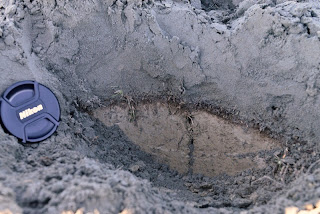 With the help of a spade, one of the sand volcanoes was sliced vertically to show a clean cross section through it. You can see the thin crack in the soil that was opened up during the earthquake, that allowed the sand loaded water to ‘erupt’ at the surface. 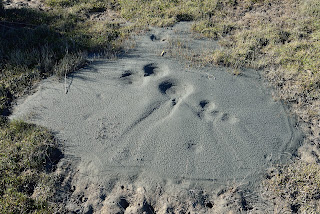 Compared to Christchurch, these liquefaction effects from the recent Cook Strait and Lake Grassmere Earthquakes are relatively minor. This is an important finding as it shows that the extreme level of liquefaction in Christchurch was not necessarily a typical example of what to expect from future earthquakes in the rest of the country. Scientists now have some more useful data to help to differentiate between the impacts of ‘quakes in apparently similar environments.