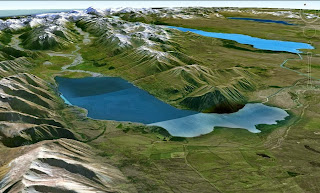 Lake Ohau is one of several very large lakes in the Southern Alps that fill valleys once carved out by huge glaciers during the Ice Age. As the ice retreated, it left spectacular and classic landforms in its wake, including concentric lines of moraines, erratic boulders, ‘U’ shaped valleys and extensive outwash plains. The rapid tectonic uplift of the Southern Alps, and extreme climatic conditions, have created the landscape we see today. 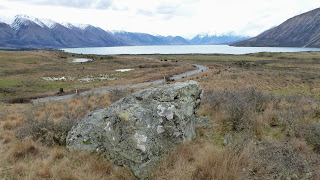 The rock debris left behind as the ice retreated, has been mapped by geologists, and a lot of work has gone into dating the ages of the various moraines to gain a better understanding of how the landforms relate to specific changes in the climate as it gradually warmed up after the coldest phase (last glacial maximum or LGM) of the last ice age. This photo shows how Lake Ohau is dammed by a rim  of 18 000 year old moraines around its southern margin. They are the low lying hummocks you can see near to the lake, as well as in the foreground. 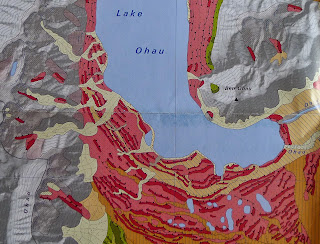 The dark red lines on this map  show the extent of these moraine ridges, extending around the south end of the lake. The brown colours are river sediment (glacial outwash) that was spread across low lying areas by braided rivers. 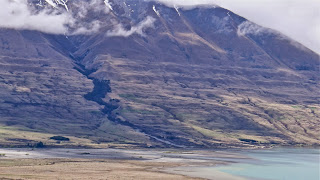 The lines crossing this mountainside above Lake Ohau are lateral moraines left behind as the glacier gradually lowered, and finally vanished at the end of the ice age.

One of the best methods of dating these moraines is by measuring the concentration of the isotope beryllium-10 in the top surface of large boulders situated on them. The technique depends on the fact that the atoms in quartz (SiO2) in the rock are constantly being bombarded by cosmic ray neutrons. When such a neutron collides with the nucleus of a silicon or oxygen atom it splits the nucleus into fragments which will be smaller, different nuclides such as beryllium-10.  (Since they are produced by a cosmic ray interaction, all these products are known as cosmogenic nuclides).

With time, a freshly exposed rock surface will gradually accumulate more and more beryllium-10 so that by careful measuring of its concentration in a boulder, the length of time that it has been exposed can be calculated.

The accuracy of this method hinges on good callibration, and selection of a rock that hasn’t moved or been buried since it became exposed

as the glacier retreated.

Lots of factors have to be taken in to consideration when sampling, including the angle of the surface of the boulder, the presence of nearby mountains that block some of the sky from view, the exact altitude and also the latitude of the sampled boulder.

These photos show samples being collected around Lake Ohau this week. The boulders being sampled have already been dated. The purpose of re-sampling them is to test calibration between laboratories in New Zealand and the US. Richard Jones is cutting small 2cm thick pieces off the surface of a boulder with a rock saw.

Once the sample has been labelled, bagged and transported to the laboratory, it needs a lot of physical and chemical processing. An accelerator mass spectrometer is used to make supersensitive measurements  of the the very small concentrations of beryllium-10 that allow the age to be calculated.

This video gives a very good introduction to the use of this surface exposure dating method for dating glacial moraines in New Zealand, featuring David Barrell from GNS Science, along with colleagues from the US.

0 thoughts on “Beryllium-10 dating of moraines around Lake Ohau”