The K-Pg Boundary (or Cretaceous Paleogene boundary, or K-T boundary as it is still sometimes called) is a layer in the Earth’s crust that marks a very dramatic moment in the history of life on earth about 65 million years ago. There is a huge change in the fossil communities of plants and animals across this boundary. Over half the species that are found in Cretaceous rocks are missing from the younger Paleogene rocks above them. Included amongst the creatures that vanished forever at this precise point in time are the ammonites, large marine reptiles (such as mosasaurs and plesiosaurs), large flying reptiles and of course the dinosaurs. 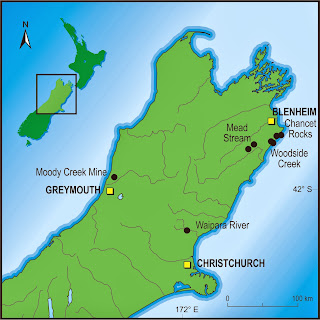 New Zealand has a unique record of the K-Pg boundary. These eight localities in the northern South Island provide the only Southern Hemisphere record of how the catastrophe affected land plants (Moody Creek Mine) and marine life (Waipara River and six localities in near Blenheim).


The now well established explanation for this dramatic crisis in the history of life is that an asteroid, about 10 km across, struck the earth near Mexico, causing a huge tsunami and a global dust cloud that darkened the skies worldwide for months, thus killing plant and animal life. After a period of recovery that lasted several thousand years, the remaining plants and animals were able to diversify into the ecological niches made vacant by this mass extinction. Mammals were one of the groups that flourished and ultimately gave rise to humans.
Recently I joined a group of scientists visiting several sites in Canterbury and Marlborough, where the K-Pg boundary is exposed.

At Chancet Rocks, just north of Ward Beach, the light coloured Cretaceous limestone contrasts with the darker grey Paleocene rocks on the right side of the photo. These rocks were laid down in several hundred metres of sea water, and the fossils found within them are mostly microscopic unicellular plants and animals. These have been studied in detail and are very different assemblages. 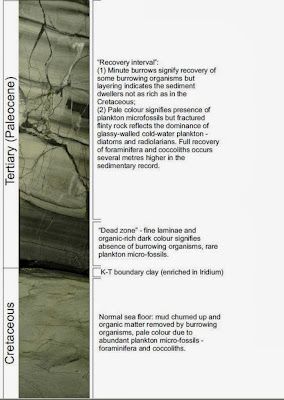 This slab cut through a section of K-Pg boundary by John Simes and Chris Hollis was taken from the coast south of Chancet Rocks. If you click on the image to enlarge it you can see some of the features in more detail. You can see the thin layer of clay that precisely marks the boundary itself. This layer has been found at sites around the world, including drill cores from the ocean floor, and is remarkable for containing high levels of an element called iridium. Iridium is common in asteroids and its abundance at the boundary was a key part of the evidence that lead to the asteroid impact theory. 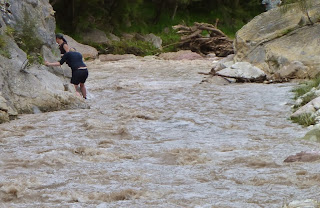 We also visited Woodside Creek, the first K-Pg boundary locality in New Zealand that was found to be enriched in iridium. Here you can see that the river was quite high, making access a little bit difficult. 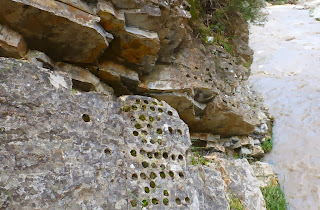 This is the Woodside Creek section. It has been sampled a lot over the years so that quite a lot of the rock has been mined away. The drill holes you can see in the rock layers on either side of the boundary itself show where scientists took samples for the analyses that led to the discovery of iridium enrichment. The image at the top of this page was taken from here. 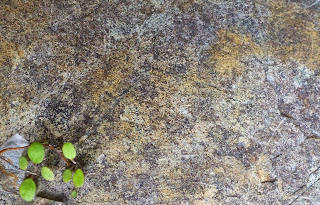 This is a close up view of the very top surface of the Cretaceous at Woodside Creek, just beneath the iridium rich boundary clay. The masses of tiny pock marks in this surface are thought to have been caused by droplets of glassy impact ejecta raining down onto the sea floor from high in the atmosphere after the impact thousands of kilometres away. 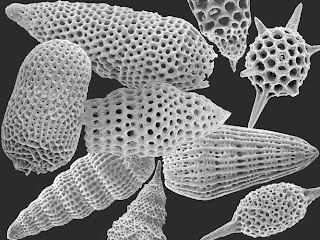 Chris Hollis at GNS Science has done very detailed studies of the Cretaceous and Paleogene rocks in New Zealand. He is a paleontologist who specialises in tiny microfossils called Radiolarians. Radiolarians are marine plankton that construct complex shells of glass (opaline silica); each species has a distinctly different shell. Radiolarians are one group of organism that didn’t go extinct at the K/Pg boundary. Instead, some species became very rare, while new species evolved and flourished. 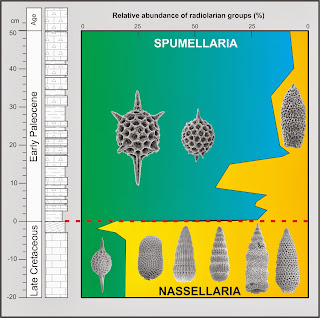 These microfossil changes are clearly shown in rock samples from the K/Pg section at Flaxbourne River, where over the distance of a few millimetres one group of radiolarians (nassellarians) are almost completely replaced by another group (spumellarians). This change is thought be a consequence of rapid cooling of the ocean waters around New Zealand.


In this video Chris tells us about the Woodside Creek K-Pg boundary section:

4 thoughts on “Global Catastophe in a thin rock layer”