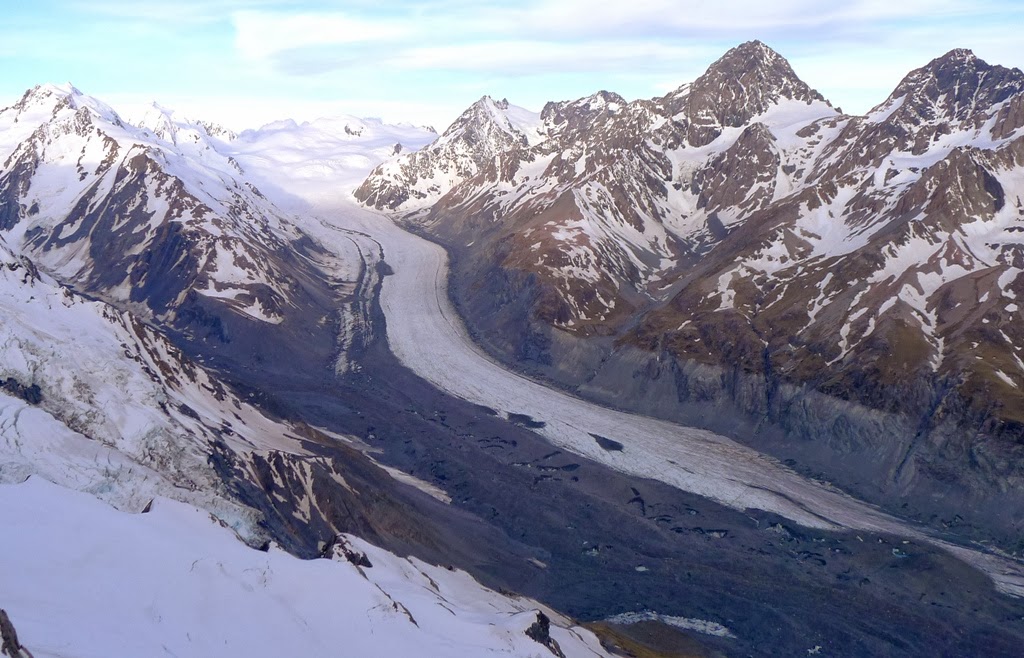 The Tasman Glacier is the largest glacier in New Zealand. Its upper section is mostly white as you would expect of a river of ice. However, the lower half is covered with a layer of rock debris about a metre thick. This forms an insulating layer that slows down surface melting and allows the glacier to descend a long way down the valley to warmer elevations. 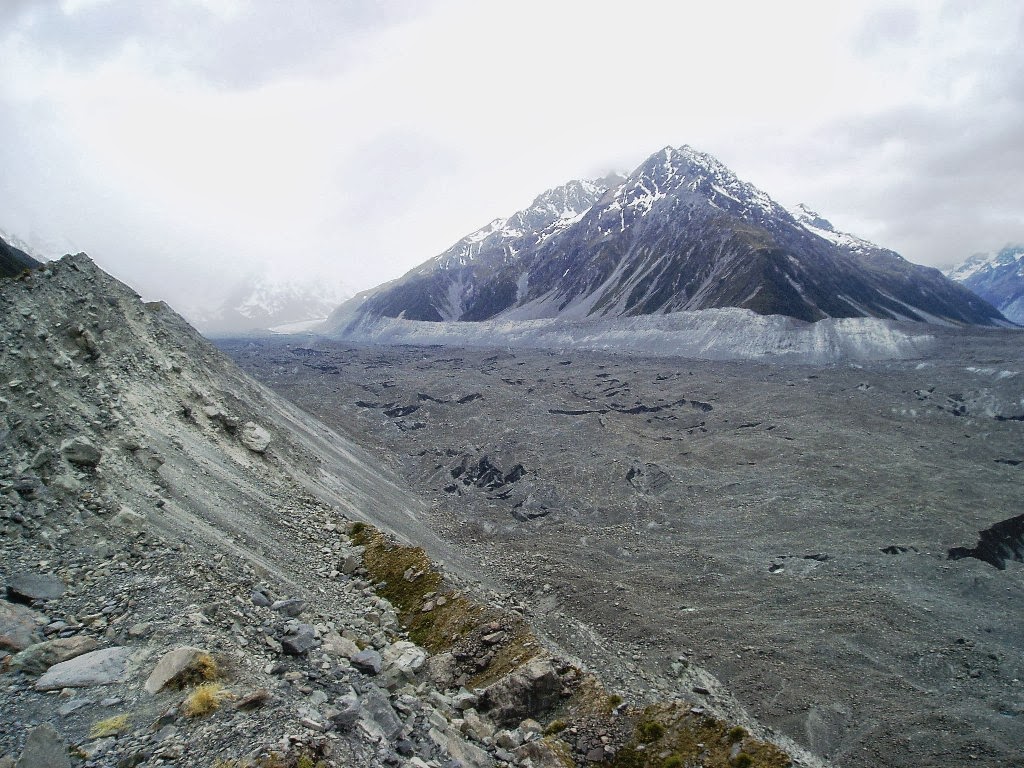 This photo, taken from the location of the the top of the moraine wall near the old Ball Shelter in 2007, shows what the debris covered surface of the lower Tasman Glacier looks like.
The moraine walls show how much the glacier surface has lowered in the last century. Before about 1912 the glacier surface was higher than the lateral moraine. New Zealand’s other large valley glaciers have all been suffering a similar loss of ice.

This is what the moraine wall of the Tasman Glacier looks like close up. The unstable terrain is very hard to travel over, especially when you are carrying heavy gear like this group of glaciologists.

For more information about fascinating processes of glaciation check out this GNS Science web page. 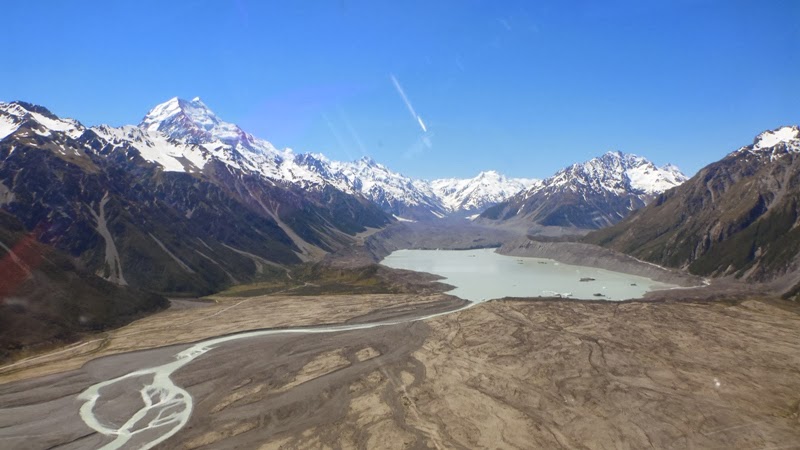 On our flight up to the Grand Plateau for the height survey of Mount Cook recently, it was interesting to see the state of the terminal lake of the Tasman Glacier. This has been expanding rapidly in recent years.  Once the lake became well established, the water could undermine and erode the ice much more quickly. 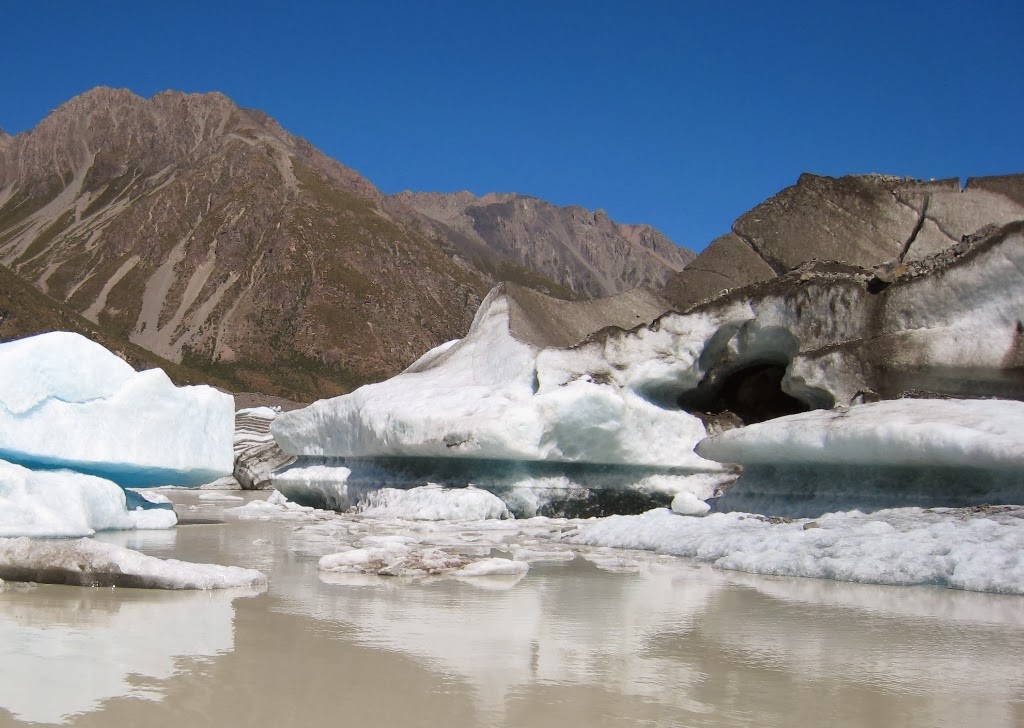 This photo illustrates the process of melting of the ice. The surface water cuts away into the ice face to create a notch at water level. Once this notch is several metres deep, the overhanging ice collapses, leaving buoyant ice underwater that eventually breaks off in big pieces to float up to the surface as a new iceberg. The icebergs will continue to be eroded by the water in the same way. As they get lighter, they rise up in the water, lifting the ice notch up to give a mushroom like profile. The bergs often get top heavy by this process and can unexpectedly roll over.

This video that we made several years ago gives a dramatic illustration of this process seen from a boat at close quarters:

Here is some information on our GeoTrips website if you want to visit the lower reaches of the Glacier for a closer look: www.geotrips.org.nz/trip.html?id=147 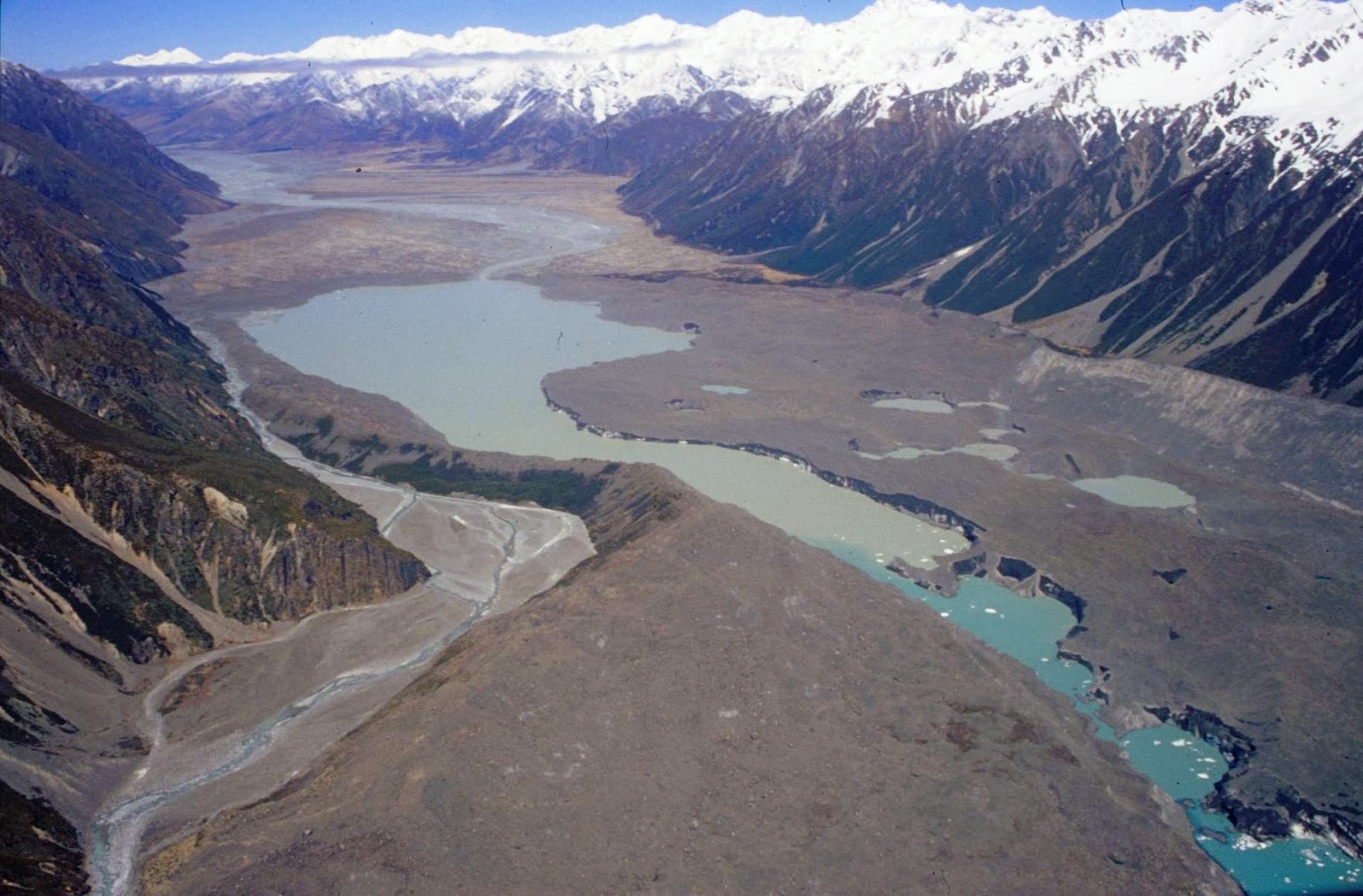 I have flown up the Tasman Glacier several times on various glacier field expeditions in recent years. This is a photo of the lower section in 2002, looking down valley. The glacier itself is about 2 kilometres wide and the lake is already extending up the east side of the glacier by about 5 kilometres. 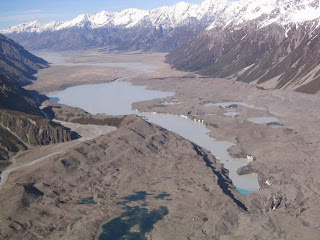 Two years later (November 2004) you can see that the lake has continued to expand. The large ponds that can be seen near to the lake have grown and started to join together as more and more of the ice melts. 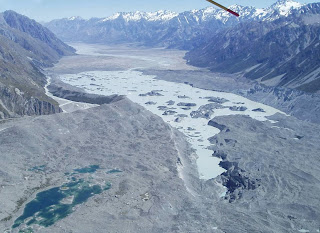 November 2007, after a large break out of ice bergs, the lake has greatly increased in size. 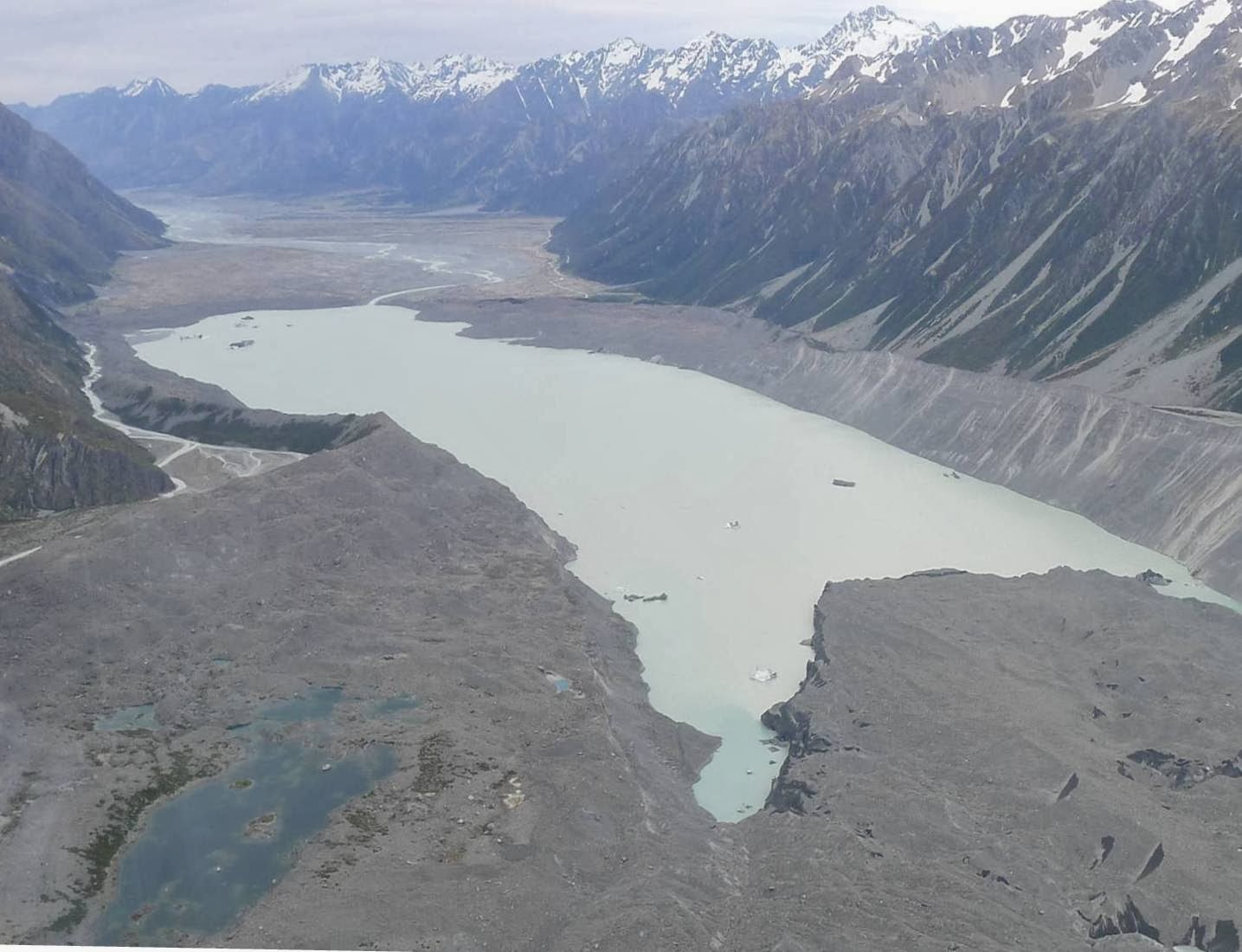 November 2013 from our recent flight up to the Grand Plateau on Mount Cook. It is inevitable that the lake will continue to expand. Due to the overdeepening effect of the glacier on its bed, the deepest point of the lake will be some distance up from the terminus, probably below the  area in the foreground of the image. After expanding past the deepest point, the lake will get shallower and shallower as it progresses up the valley, potentially to the point where the bed of the glacier meets the lake surface. It has a long way still to go. 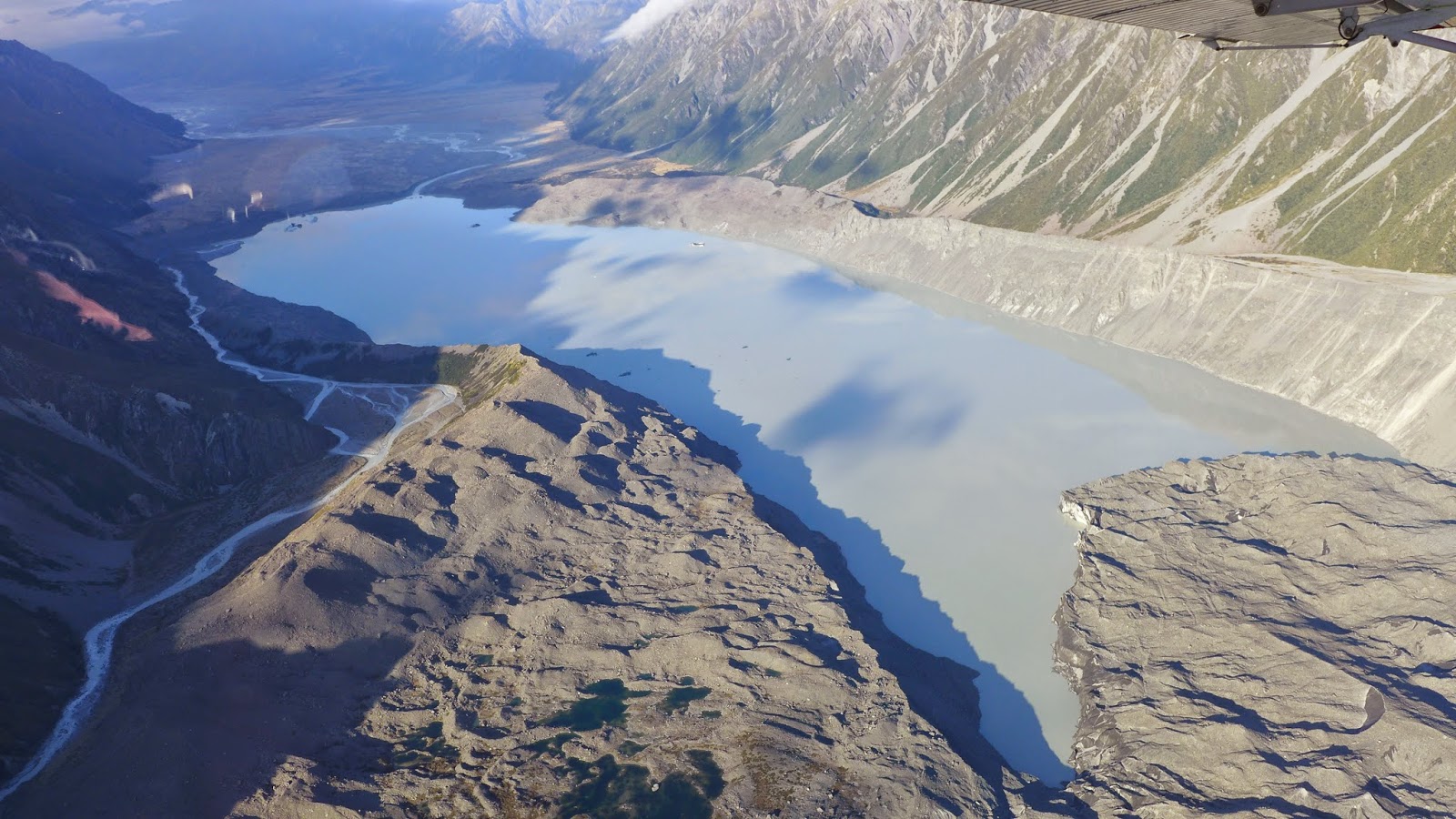 This image (added as an update in early March 2015) shows that the basic shape of the lake hasn’t changed substantially since the previous photo was taken over a year ago. However, if you look at the position of scree slopes on the right of the photo you can see that the glacier’s retreat is continuing. 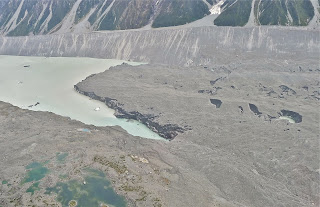 In this last photo you can see that as the lake erodes further up the glacier, the terminal ice cliff at the edge of the lake is getting higher due to the increasing surface elevation of the ice. There is a very good view of the lateral moraine wall in the background, that used to be below the level of the glacier surface back in the nineteenth century.  The glacier ice in this area has thinned vertically by roughly 200 metres since that time.