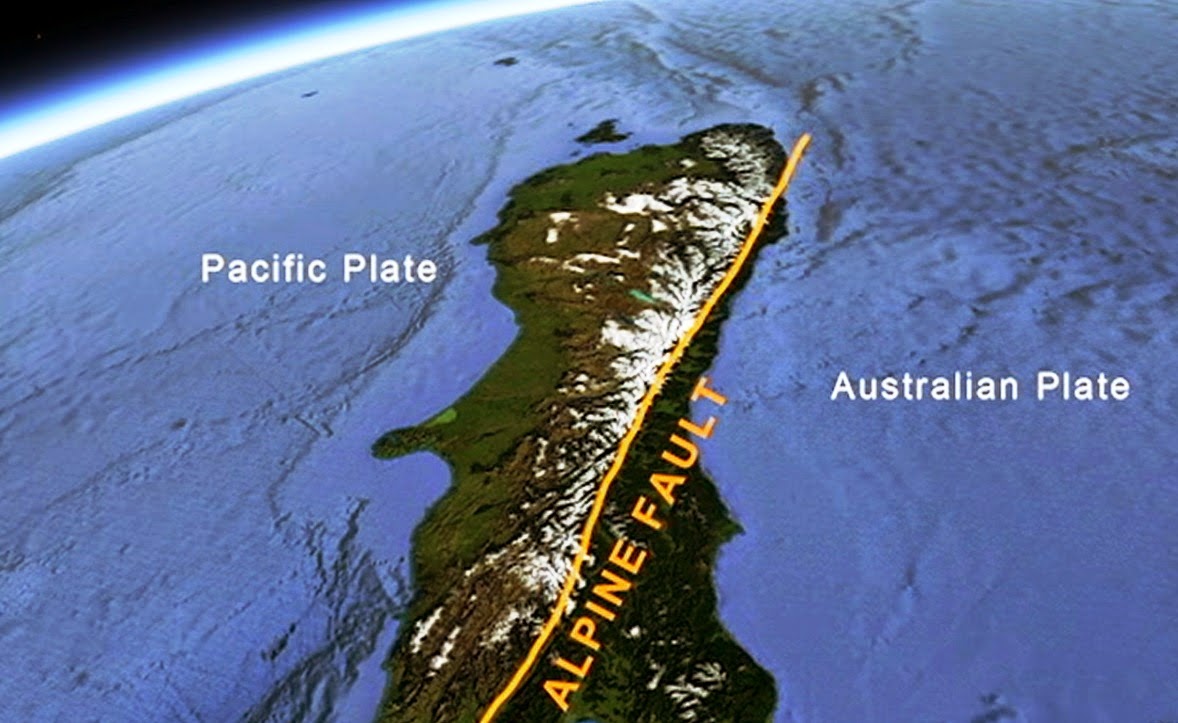 The Alpine Fault forms the plate boundary in New Zealand’s South Island, and is a very significant fault on a global scale. It last ruptured in 1717 AD and appears to produce large earthquakes on average every 330 years. Its next rupture has a high probability (28%)  of occurring in the next 50 years.

Each time the Alpine Fault ruptures, there is roughly 8 metres of sideways movement and about 1 to 2 metres of vertical uplift on the eastern side. These magnitude 8 (M8) earthquakes can rip the fault along about 400 kilometres of its length. Slowly, over millions of years, this is what has created the Southern Alps, and offset rock formations on each side of the fault sideways by a phenomenal 480 kilometres. Massive and continual erosion of the Southern Alps keeps them relatively small (below 4000m) inspite of about 20 kilometres of uplift over the last 12 million years. For a lot more information about the Alpine Fault and its earthquakes, check the GNS Science website.

Later this year, scientists plan to drill through the Alpine Fault at a depth of more than one kilometre  to sample the rocks and fluids of the fault at depth, and to make geophysical measurements down the borehole to better understand what a fault looks like as it evolves towards its next earthquake rupture. This is phase two of the Deep Fault Drilling Project (DFDP-2).

The first phase of the project (DFDP-1) was successfully carried out in 2011 when two shallow boreholes were drilled through the fault to about 150m and the first observatory set up at Gaunt Creek.  DFDP-2 will involve drilling a short distance away in the Whataroa River valley, not far upstream from the road bridge on State Highway 6.

The prospect of drilling through a massive fault could  sound alarming to some people. Is there a possibility that this project could cause a damaging earthquake? Check this next video to hear about the safety review:

0 thoughts on “Drilling into New Zealand’s most dangerous fault”