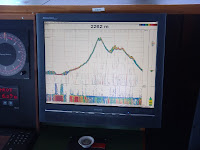 The first image shows the depth profile created by the ship’s sonar as it passed over the summit of Clark Volcano. It has the classic cone shaped profile of a typical land volcano such as Taranaki. They stick up above the deeper plains of the ocean floor and provide quite different habitats for deep sea creatures. The plains are mainly very soft muddy sediments which contain an abundance of worms and other burrowing animals. The seamounts on the other hand are covered by harder volcanic rocks that provide a solid surface for a different living community.

In order to gather actual samples of the rocks and animals that occur on the surface of these seamounts, a simple method is to use a sled. This is a crude metal cage with a net at the back. It is pulled along the sea floor for a short distance and then hauled up by winch. The second photo shows a fully laden sled just arriving back at the surface.

Once the sled has been emptied onto the deck, the biologists quickly pick off the largest and most obvious specimens and put them into a bucket of sea water. Then the rocks are scooped up into the yellow bins and checked more carefully for smaller creatures.

Once all the different finds have been sorted and given an initial identification, they are put into carefully labelled bottles and preserved for later more detailed research.

These small lobster-like crustaceans probably all belong to the same species.
They are often found tucked away into a rock crevice with just their claws showing, ready to catch some food.

Rob Stewart, one of the team of NIWA biologists, showed me this large piece of coral that has come up with the sled. This branching coral often grows on seamounts and provides a living space for many other animals to hide in.
This one had several residents, including the large worm that you can see, as well as a hydroid coral, a couple of large flower like solitary corals, and a brittle star or two. 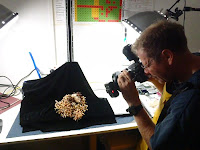 Rob has a camera set up in his lab to take a photographic record of such prize finds. The last photo shows another view of this sample in all its glory. Because the different seamounts along the Kermadec Arc are separated from each other by the deeper ocean plains, the biologists are interested to compare the living communities on them. This will help improve our knowledge of how these animals have spread and diversified through time along a line of active volcanoes.