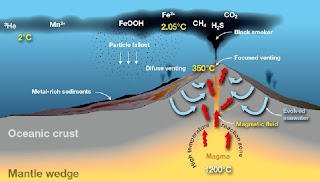 Hydrothermal activity in undersea volcanoes is largely the result of sea water descending into the crust, being heated up and then chemically breaking down the surrounding rocks as it rises back up to the sea bed. These mineral rich fluids then re-enter the water column either diffusely over a wide area, or out of one of many vents in a hydrothermal field. 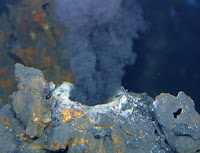 As the emerging hydrothermal fluids mix with the sea water and quickly cool down, the dissolved minerals within them precipitate out. Some (such as metal sulphides) will accumulate immediately around the vent to create vertical chimney like structure, whilst others (such as iron and manganese oxides) will form particles that get carried up in the hot water plume to form a sheet like cloud that is pulled sideways by water currents. The particles within the cloud will slowly rain out back to the sea floor over a wide area.

Sharon Walker from NOAA (the National Ocean and Atmosphere Administration in the US) specialises in analysing the physical and chemical properties of sea water to locate hydrothermal plumes and the vents that have created them. She uses several tools mounted onto a CTDO (conductivity, temperature, depth and optical) recording device. 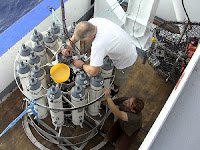 In the photo you can see Cornel de Ronde and Matt Leybourne preparing the CTDO. It will be towed below the ship and lifted up and down to sample at different depths. 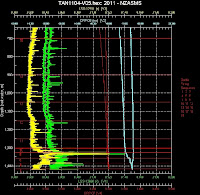 On it there is a light scattering sensor which detects reflected light to give a measure of the water’s particle content.

It will also take samples of water from different levels in the water column for chemical analysis. Yesterday Sharon and Matt collated some results to create this diagram of the hydrothermal plume above Rumble 2 West volcano. The green and yellow lines represent light scattering. You can see that near the bottom there is a large spike indicating a hydrothermal plume about 30 metres thick. Faint red lines across the graph show the depths at which water samples were taken. 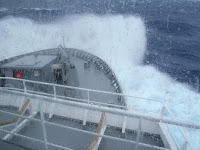 Finally here is a photo I took from the bridge during quite windy and choppy conditions the day before yesterday, just to show that it is not always flat as a mirror out here. For some of us landlubbers it meant spending a bit of time outside looking over the rail… just admiring the view of course.