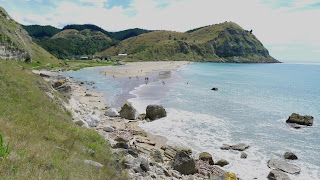 Waipatiki Beach north of Napier is a great place for family holidays in the summer.  It is enclosed by cliffs at either end that happen to provide one of Hawkes Bay’s many classic geological sites.
(for more geological and access information see also www.geotrips.org.nz/trip.html?id=24) 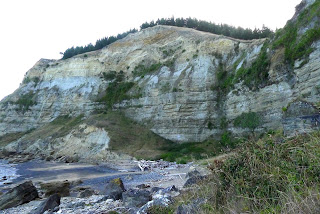 A track leading south of the beach takes you to a good view of the cliffs. (Update: there have been very big big rockfalls in this area and it is likely to be safer to explore the north end of the  beach.) You can see several colour changes in the rock strata from the base of the cliff to the top. These are due to the fact that the water depth in which the rocks were laid down changed through time. The blue grey band in the middle of the cliff is fine grained mud with a few oyster fossils, that was deposited offshore in about 50 to 80 metres of water depth.The more orange coloured rocks were laid down in shallower water, with beach sand and many fossils. 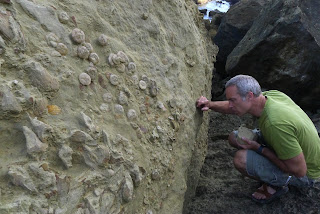 Because of erosion and rock falls, there are many boulders rich in fossils that have fallen down onto the beach below. This is where you can find lots of interesting specimens. In this photo, Richard Levy, a sedimentologist from GNS Science is looking at a slab full of bivalves and sand dollars. This is reminiscent of many modern New Zealand beach environments such as along the Kapiti Coast north of Wellington. 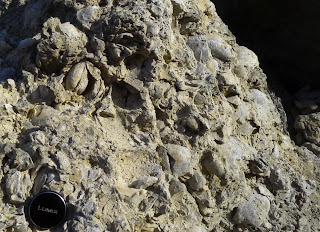 At the top of these orange beds the fossils have been washed around and damaged by wave action, indicating a very shallow environment of deposition.

A close look will show that the fossils here include very few actual shells. This is because many sea shells are made of aragonite, a form of calcium carbonate that differs in its structure from the other common alternative which is calcite. Aragonite tends to dissolve relatively easily during the rock forming process, and to re-precipitate as calcite in the matrix of the sediment. This makes these rocks very hard, but with many gaps where shells have disappeared, leaving only the internal casts. 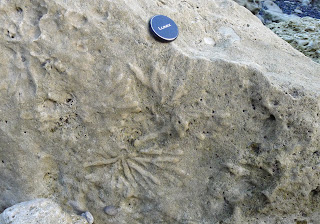 In this photo you can see some trace fossils made by some sea animals burrowing into the sediment about two million years ago. 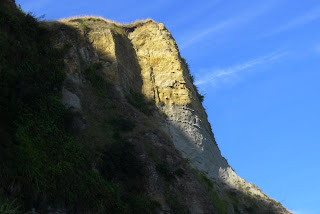 So why do the rocks show this change from the grey muds, deposited in relatively deep water, to progressively shallower sandstone and limestone?  Either the land was going up or the sea level was going down, or perhaps both were happening at the same time.

The rocks around Hawkes Bay and other parts of New Zealand show clearly that the main cause was sea level change, which in turn was due to global ice age cycles which themselves were driven by changes in the earth’s orbit around the sun (called Milankovitch Cycles). So if you ever go to Waipatiki for a holiday, you may like to look for some fossils and consider the relationship between Astronomy and the colours of the cliff.