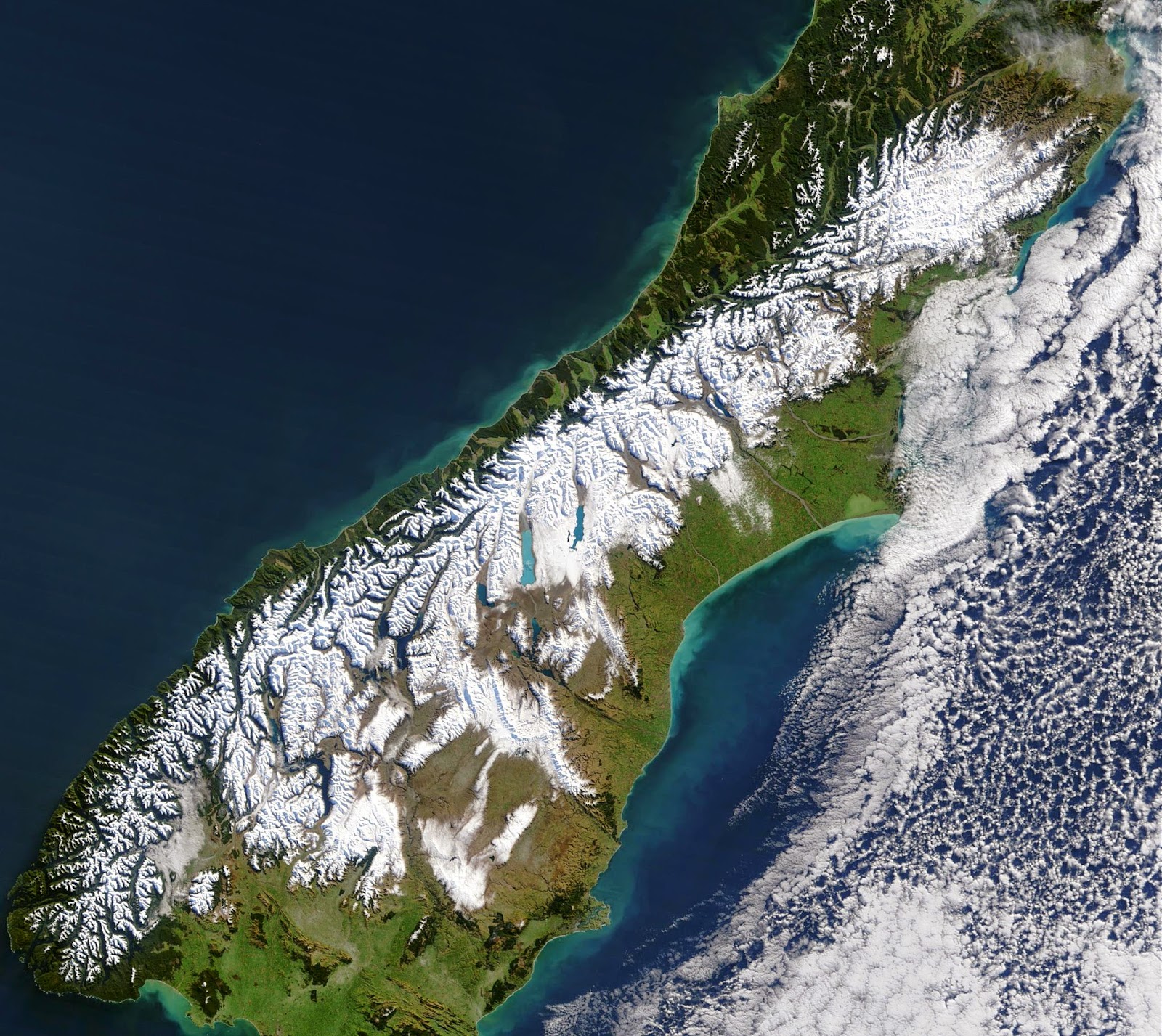 The famous NASA image of New Zealand’s South Island clearly shows the trace of the Alpine Fault along the straight western edge of the Southern Alps. 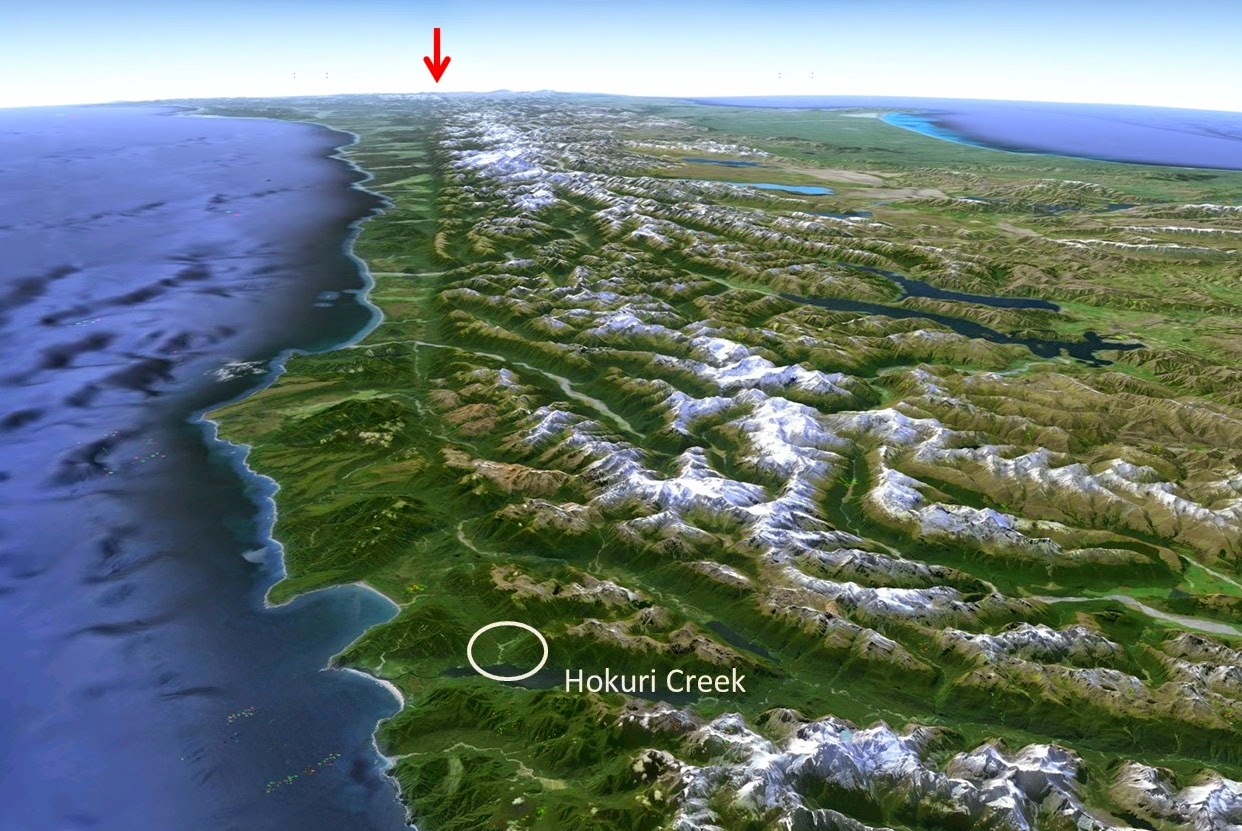 This oblique Google Earth view of the West Coast shows the relative uplift on the eastern side of the fault that has created the Southern Alps. The Hokuri Creek location indicated on the image is the site of a very important record of Alpine Fault earthquakes going back for the last 8000 years. A significant feature on this part of the fault is that it has actually been uplifting on its western side, instead of to the east as it does along most of its length. 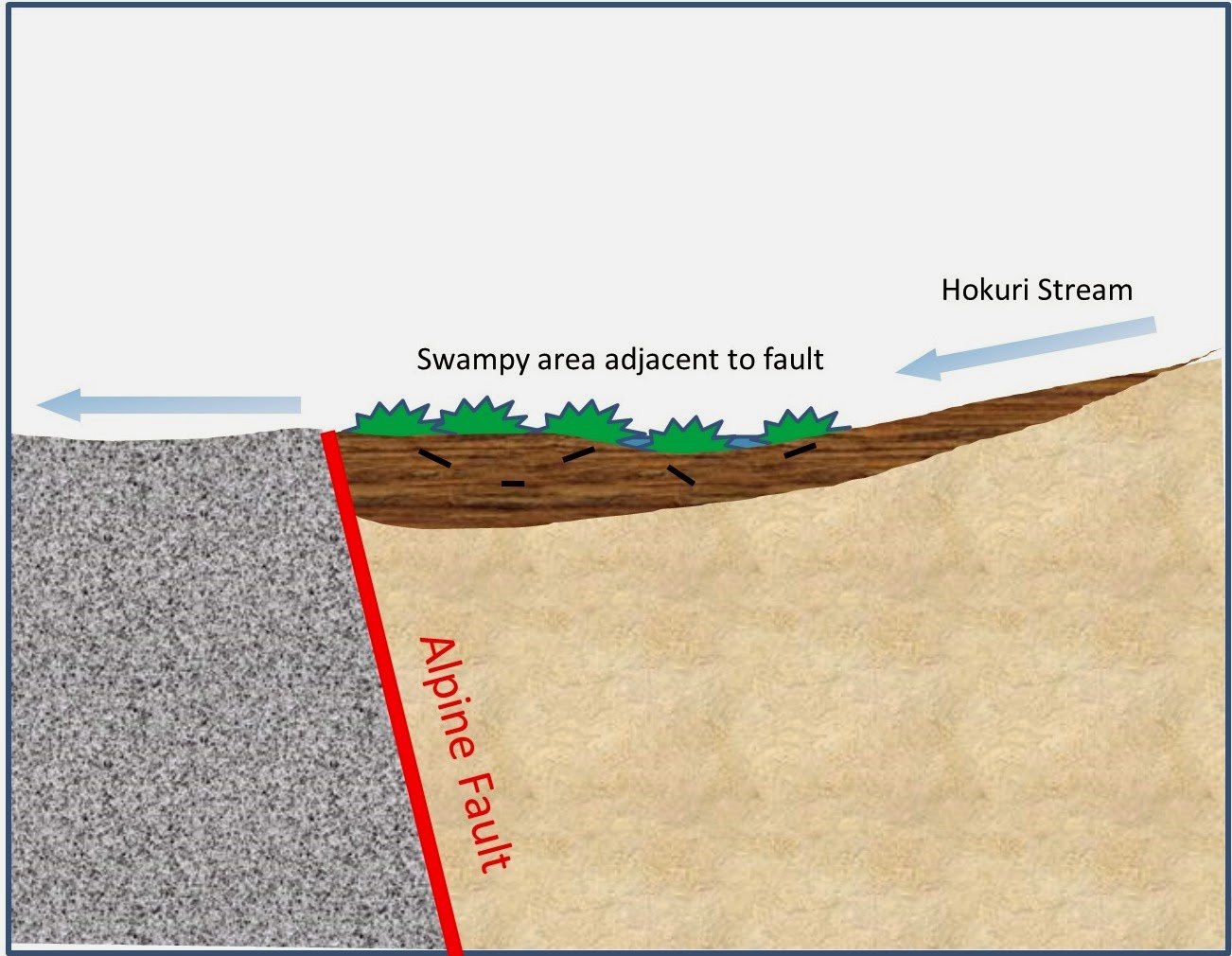 These diagrams show how the amazing record of earthquakes was created at Hokuri Creek.

The first picture shows how the low fault scarp blocks the stream, ponding the water and creating a swamp. This gradually fills up with carbon rich plant material (peat) so that eventually the surface of the swamp becomes level with the top of the scarp and the river flows straight across it. 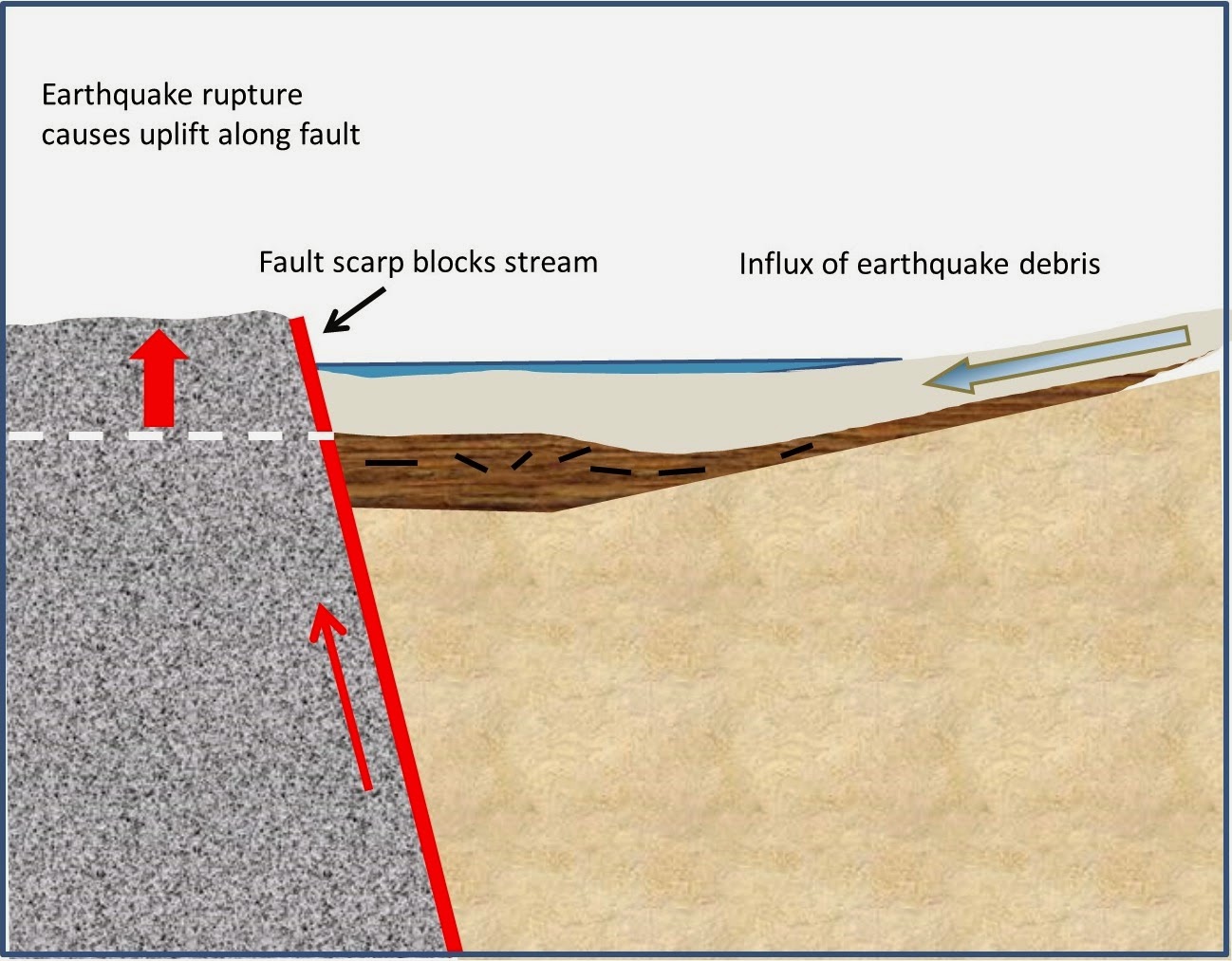 When an Alpine Fault earthquake occurs, the fault uplifts by about a metre, creating a space into which the creek brings loose rock debris (gravel, sand and silt) washed down the river from landslides caused by the groundshaking. 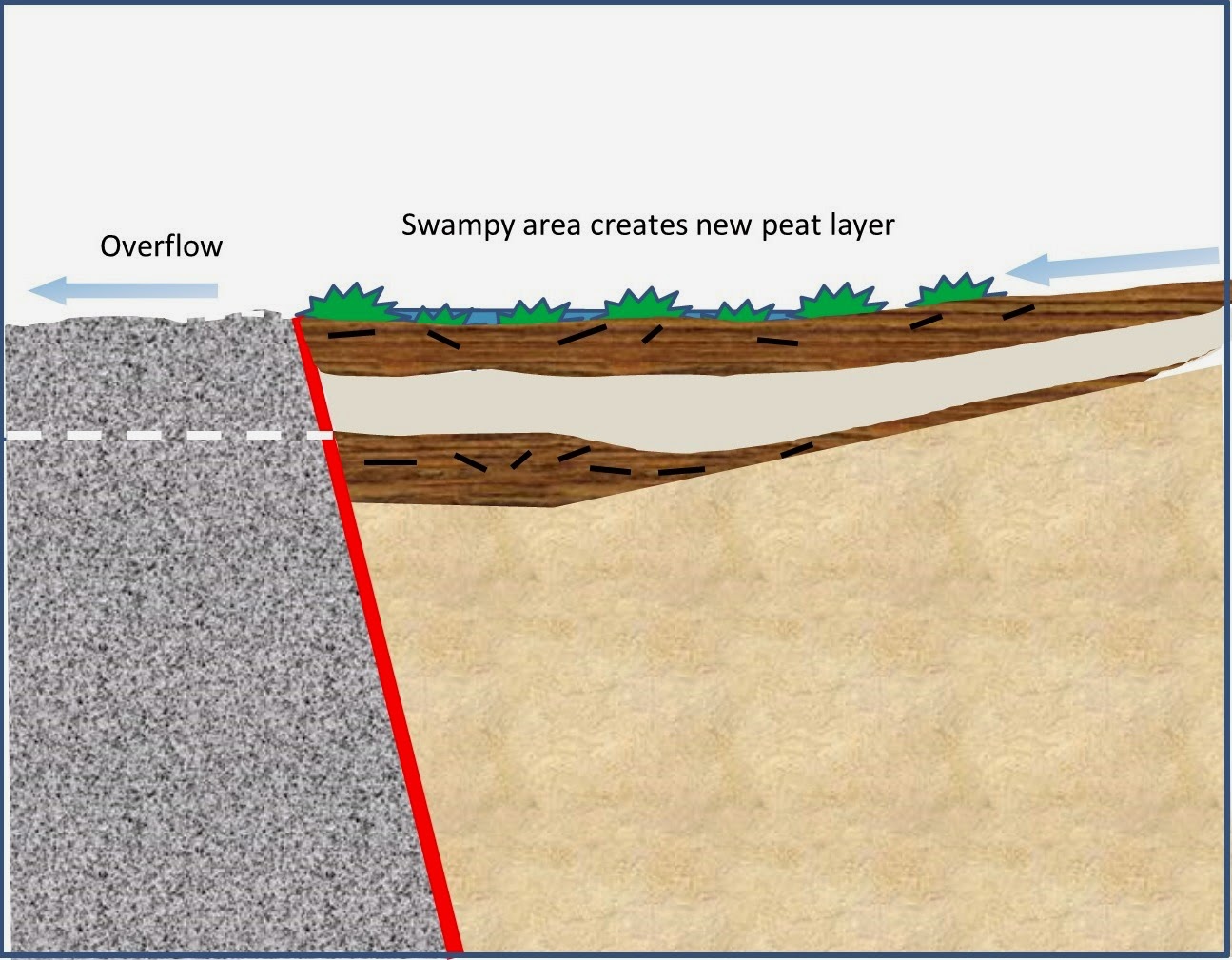 A new swamp develops once the land stabilises until the peat layer again reaches the level of the top of the scarp. 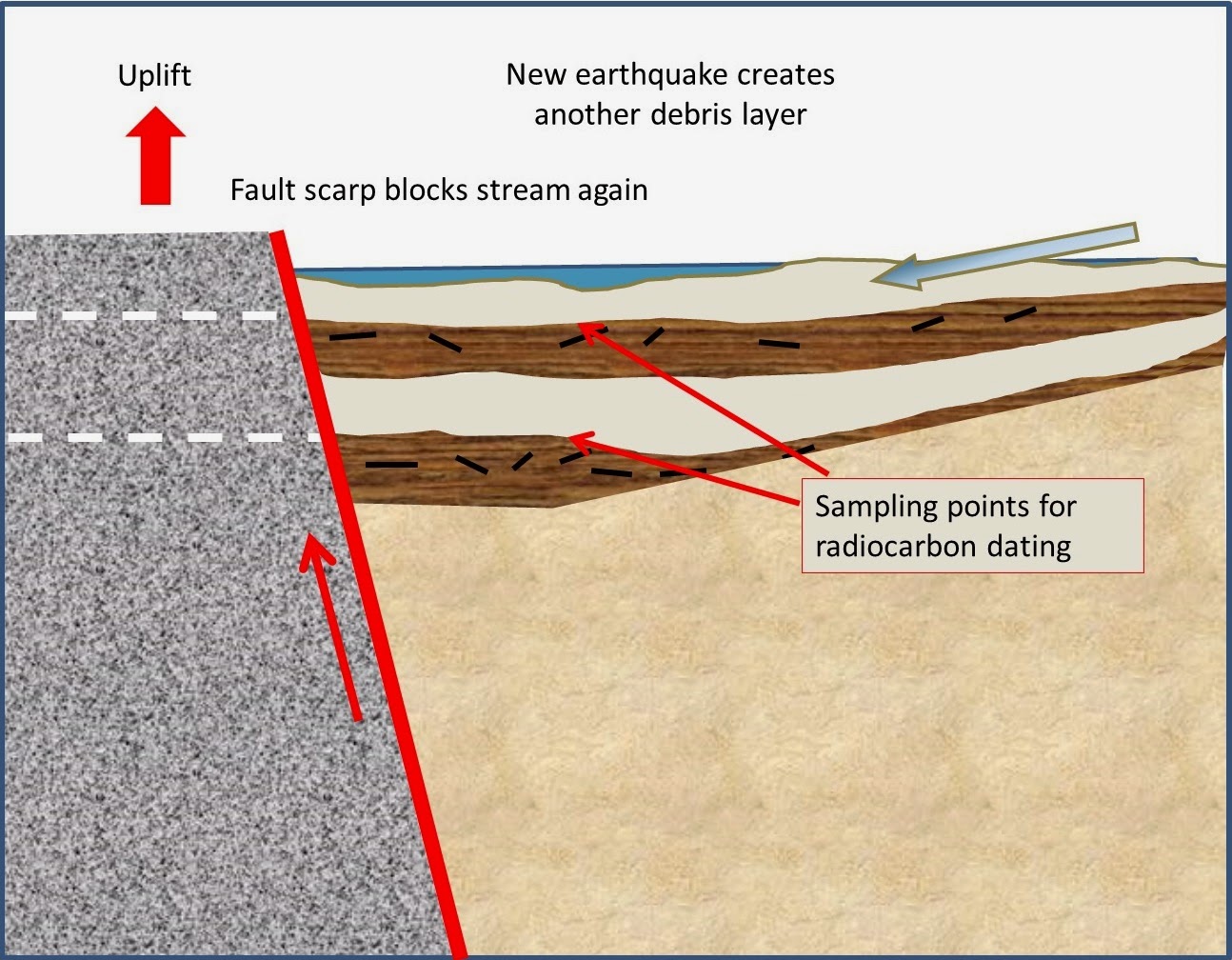 Another Alpine Fault earthquake uplifts the scarp, and a new earthquake debris layer is deposited, adding another record to the fault rupture history. The great thing about peat layers is that they provide plenty of carbon material for radiocarbon dating.The time of past earthquakes is at the horizon where the peat changes upward into landslide derived sand and silt, so by taking samples at this layer, the earthquakes can be dated. 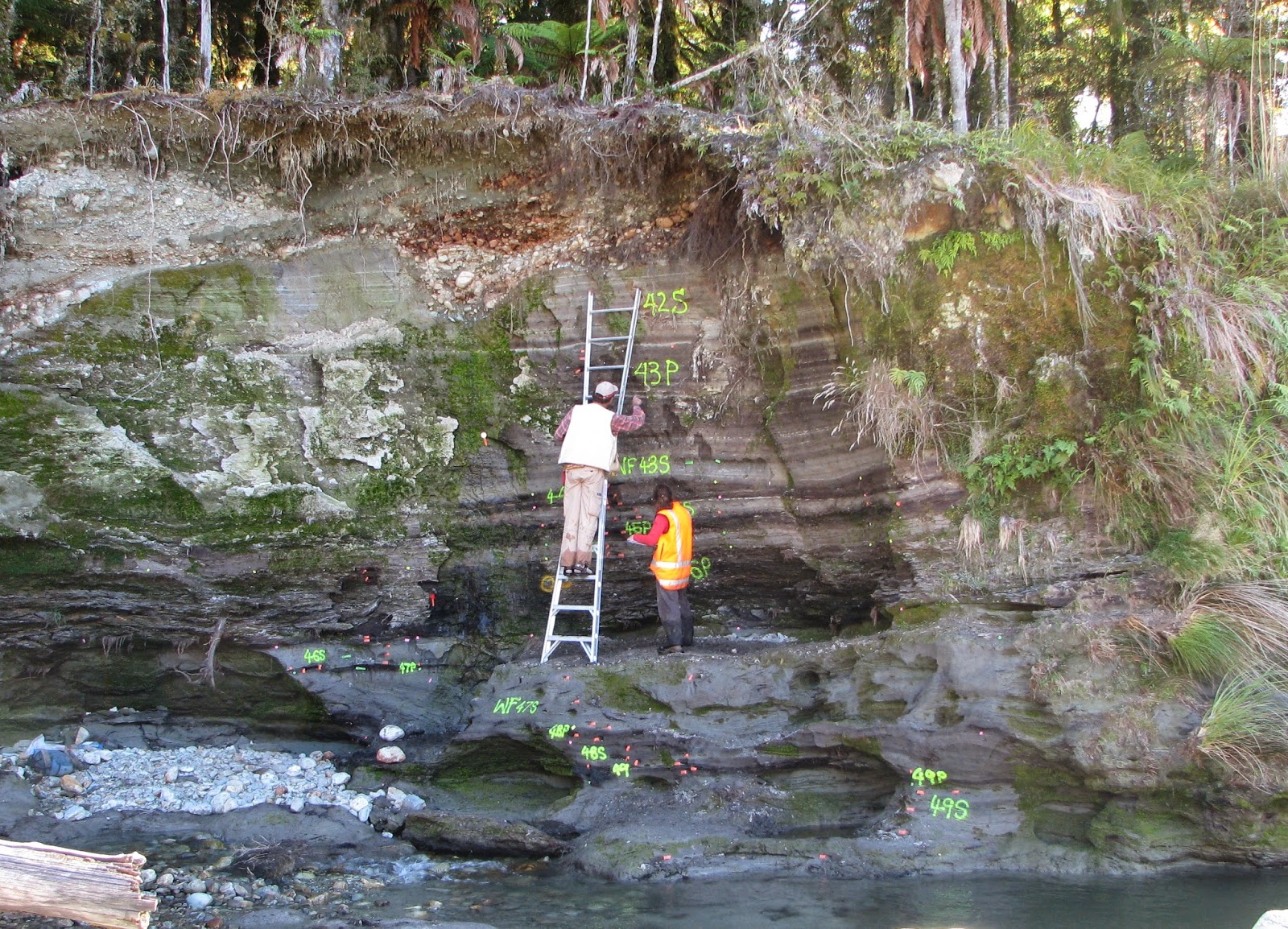 At Hokuri Creek, by a quirk of fate, the river found a new outlet several hundred years ago, eroding downwards and exposing the sequence of peats and earthquake debris layers like pages in a book.This does mean however that the record of the two or three most recent earthquakes is not available here. You can see how  scientists used a ladder to access good sampling points. 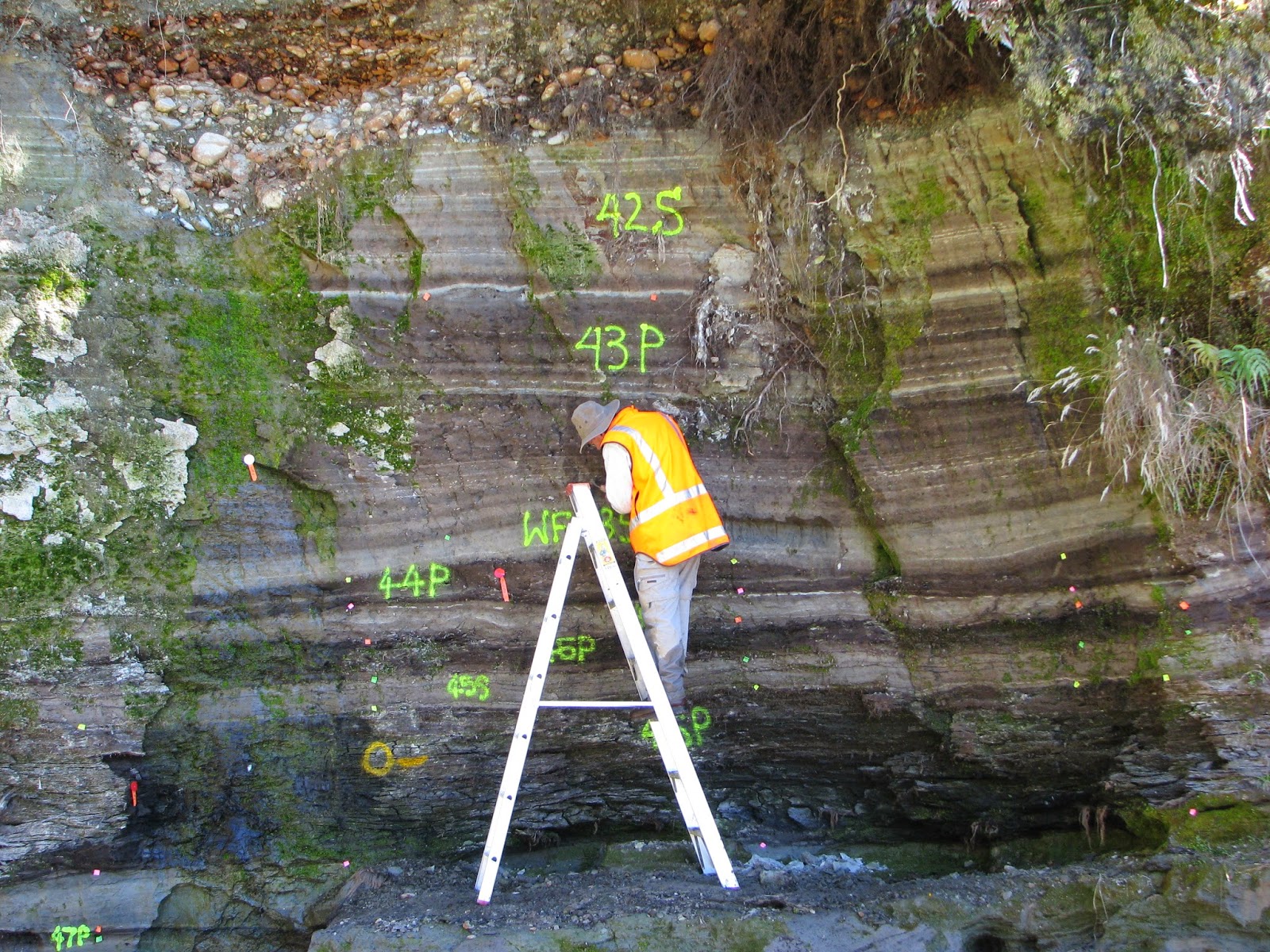 Amazingly, they were able to trace 24 earthquakes going back over the last 8000 years. Records of the two or three most recent ‘quakes, missing from this sequence, have been found in a more recent study at the nearby John O’Groats swamp. Scientists were able to recover several sediment cores there that complete the sequence. 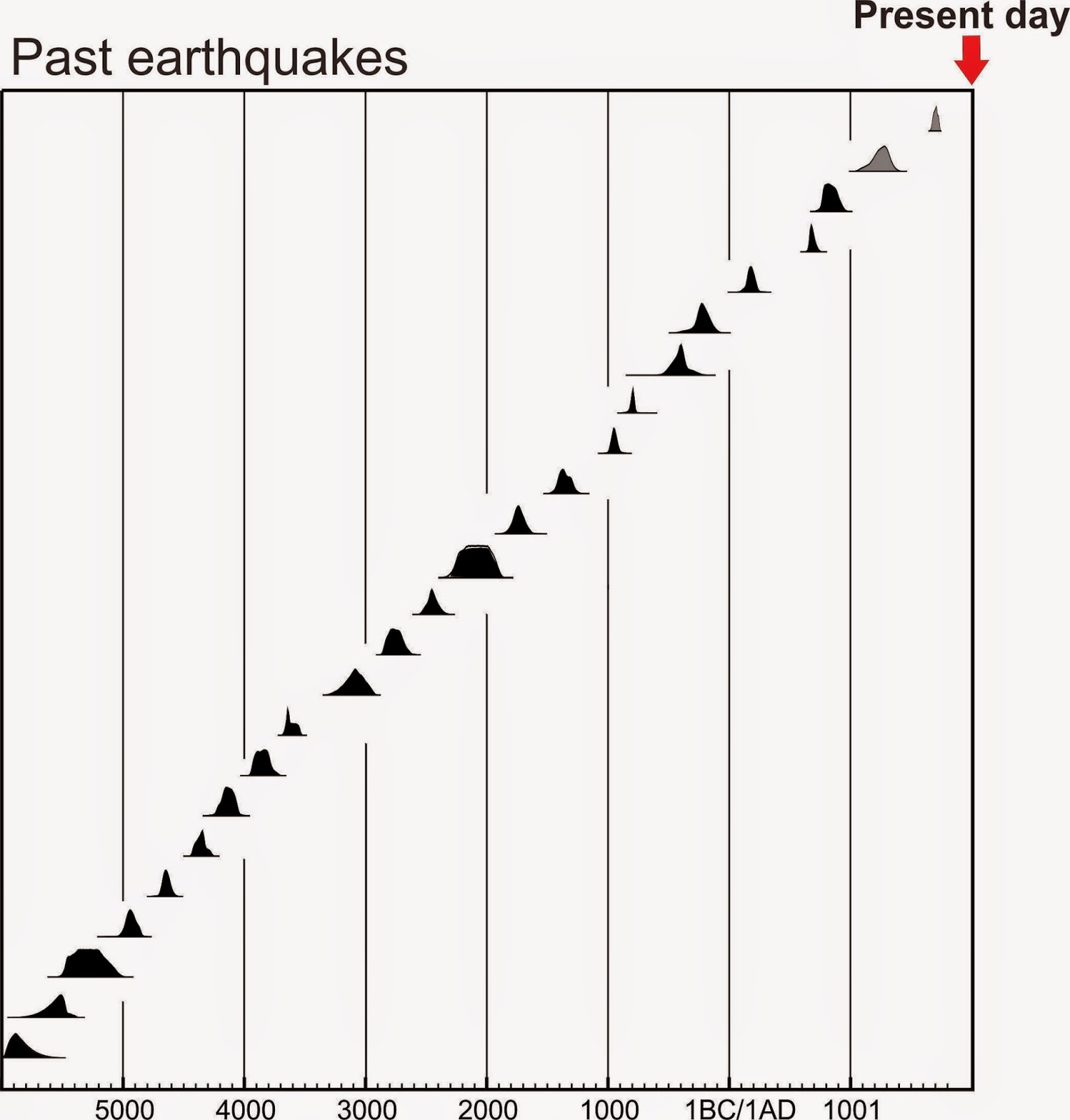 Carbon dating gives a date range within which the most likely date is at the peak of the probability curve. (To understand radiocarbon dating have a look at this GNS Science video. ) The dating results that you can see on this graph show how the Alpine Fault at Hokuri Creek has been rupturing in a very regular cycle over the last  8000 years. The intervals do vary – from 140 to 510 years, but the average is 330 years. In fact the most common actual interval between Alpine Fault earthquakes is 300 years, which is sobering when you realise that the last Alpine Fault rupture was in 1717, just under 300 years ago.

To give you some idea of the significance of this Alpine Fault history, here is a comparison with three other major transform faults. This shows clearly how the Alpine Fault exhibits by far the most regular earthquake behaviour of a big fault anywhere in the world. 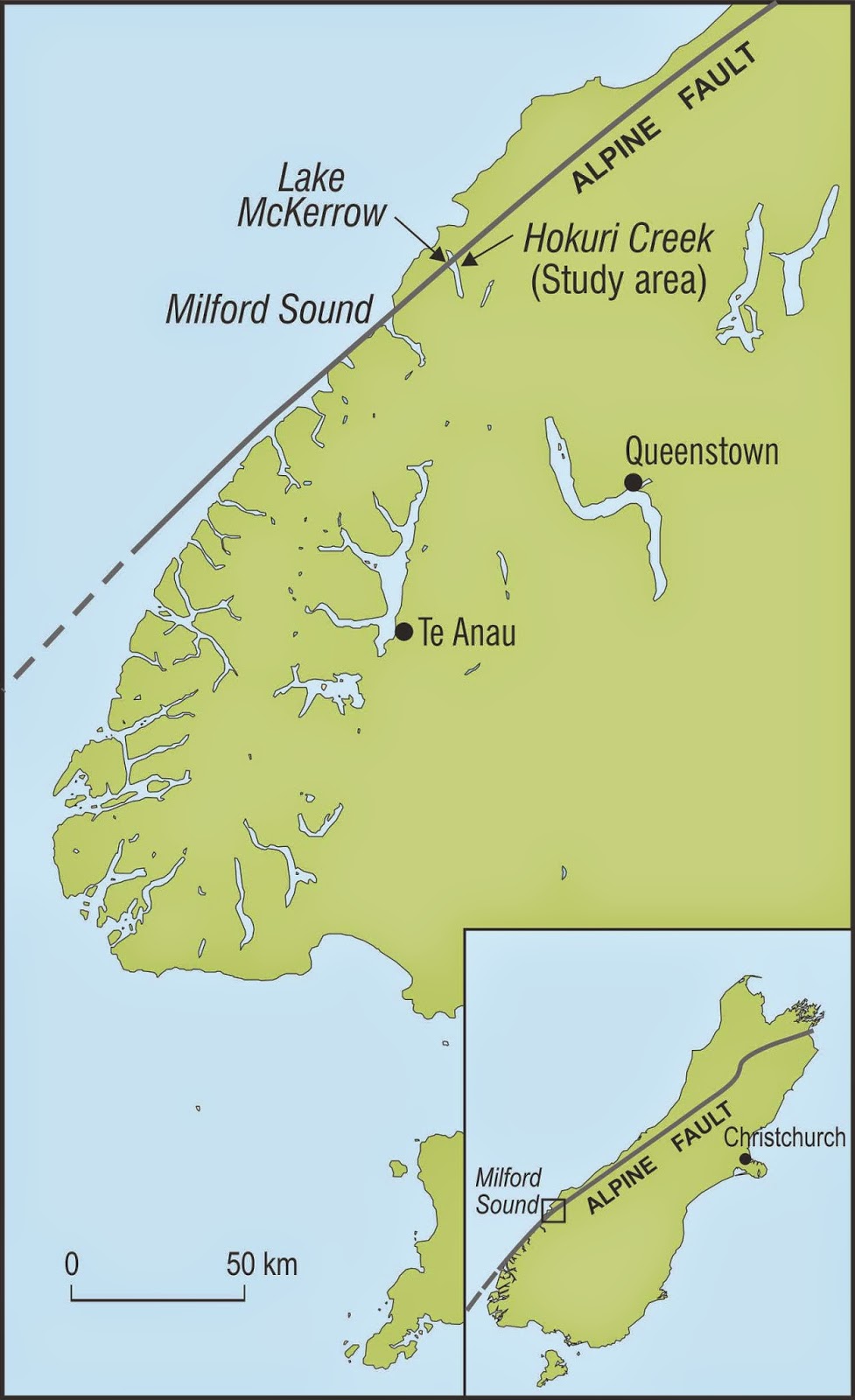 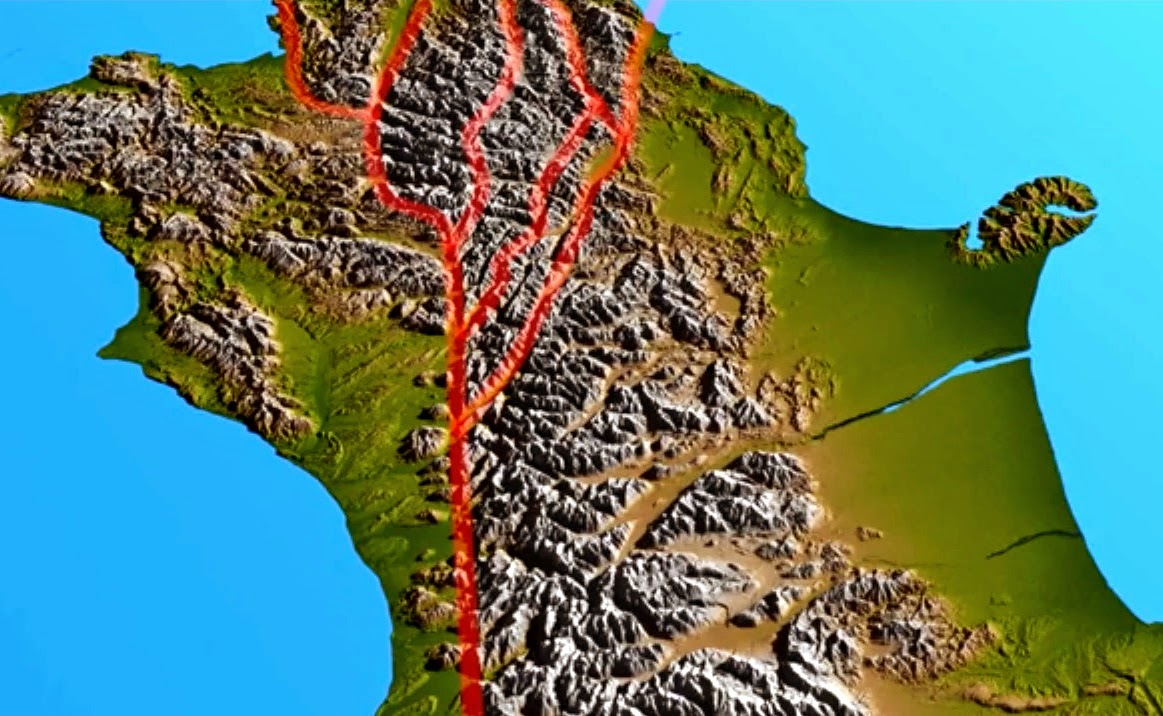 In northern South Island, the Alpine Fault divides into a number of separate faults know as the Marlborough Fault System. The slip rate (average movement) on the Alpine Fault drops down from about 27mm per year to less than 10, with the remainder being taken up by the other faults nearby. This means that the Hokuri Creek history cannot be applied to the northern (Marlborough) end of the Alpine Fault.

This project has been led by GNS Scientists Kelvin Berryman, Ursula Cochran and Kate Clark. The media release about it can be found here, or go to the GNS Science website learning pages here.

0 thoughts on “A Ticker Tape Record of Alpine Fault Earthquakes”