This is Lake Christabel in New Zealand’s South Island. It is one of the many beautiful alpine lakes  to be found close to the Alpine Fault. 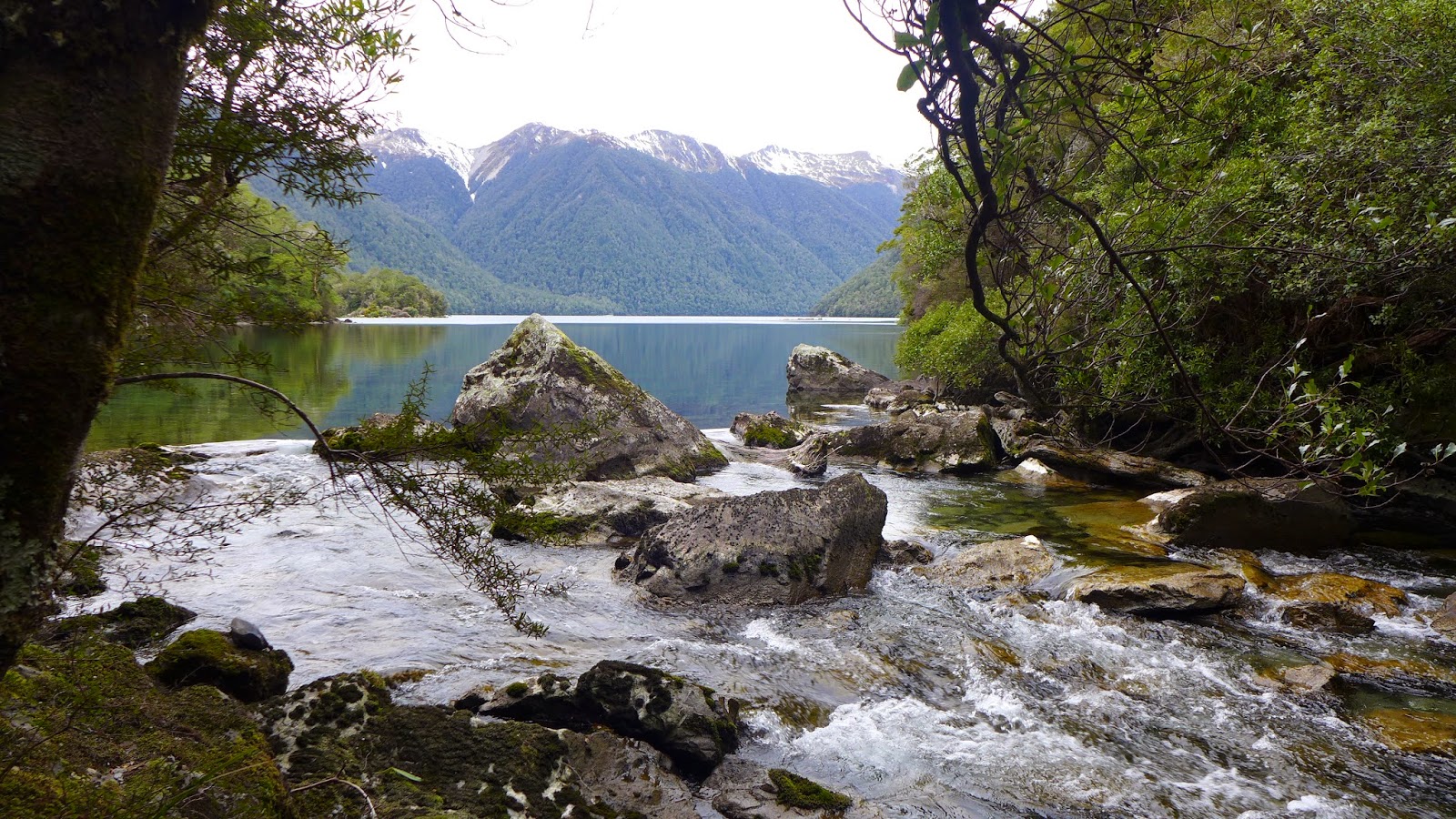 Lake Christabel was formed when a huge landslide blocked the valley, thus damming the river that then backed up to form the lake.The present day outlet runs over the old landslide deposit of large chaotic boulders. 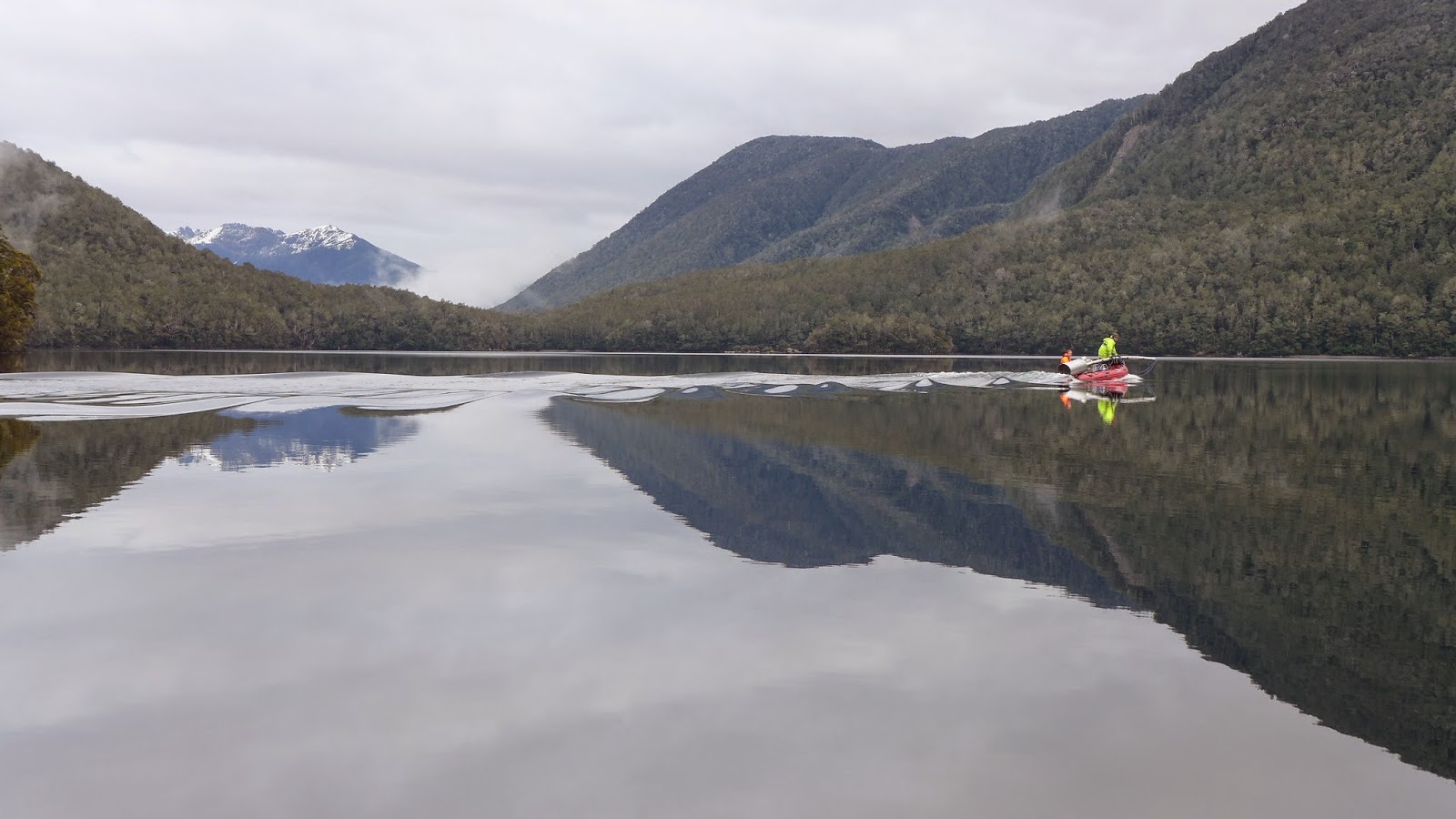 Hidden beneath the waters of Lake Christabel are very distinctive sediment layers that tell the story of huge earthquakes that rocked the nearby mountains during ruptures of the Alpine Fault. Jamie Howarth from GNS Science, and Sean Fitzsimons from Otago University, have been investigating several such lakes to read the earthquake histories. 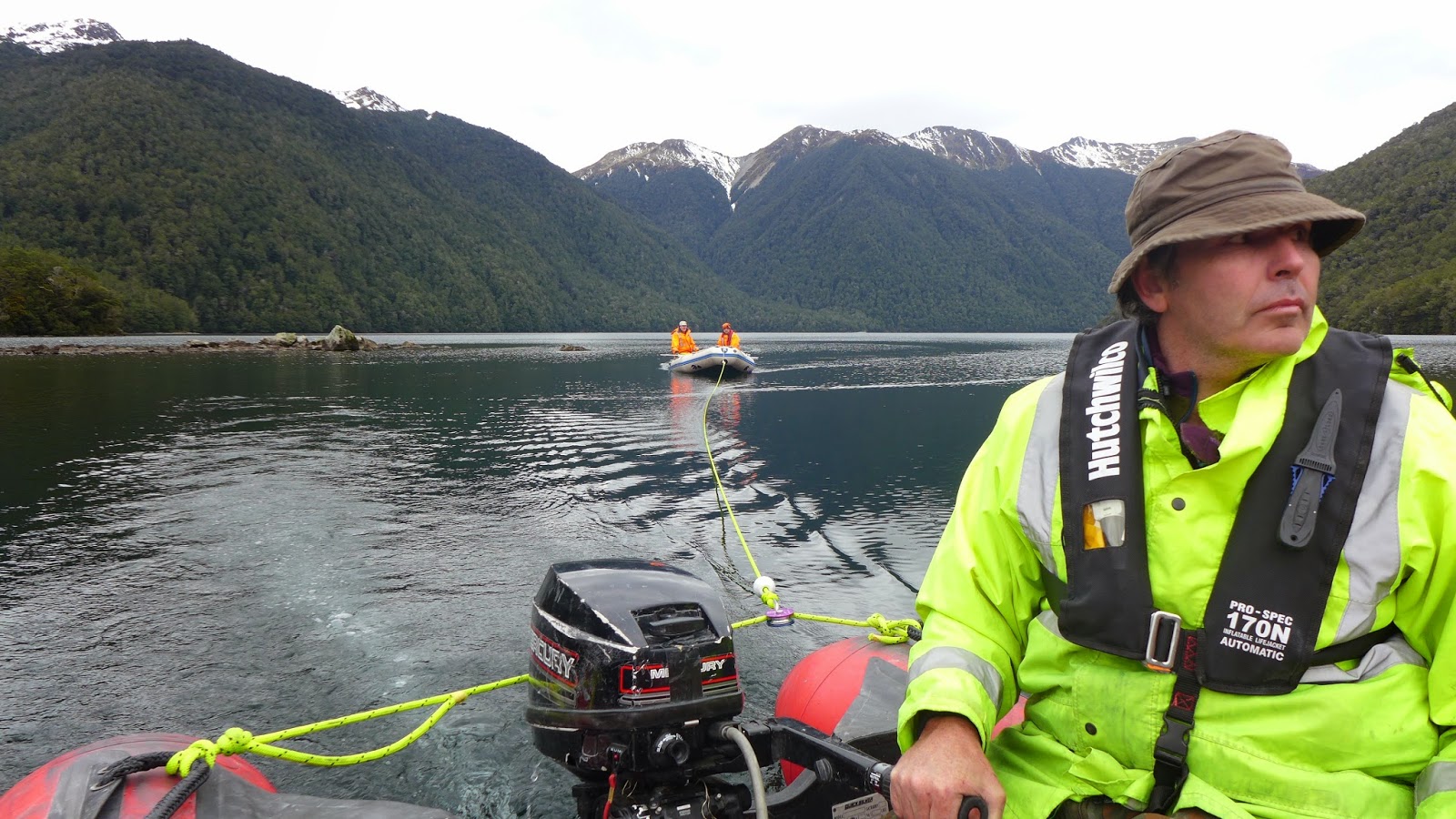 I joined them on a recent expedition along with Delia Strong and Rob Langridge from GNS Science. The aim was to retrieve sediment cores from the lake to investigate the earthquake records. First of all a seismic survey was undertaken to find the best spots to sample on the lake bed. Sean is in the lead boat, towing a second dinghy that carries the equipment. 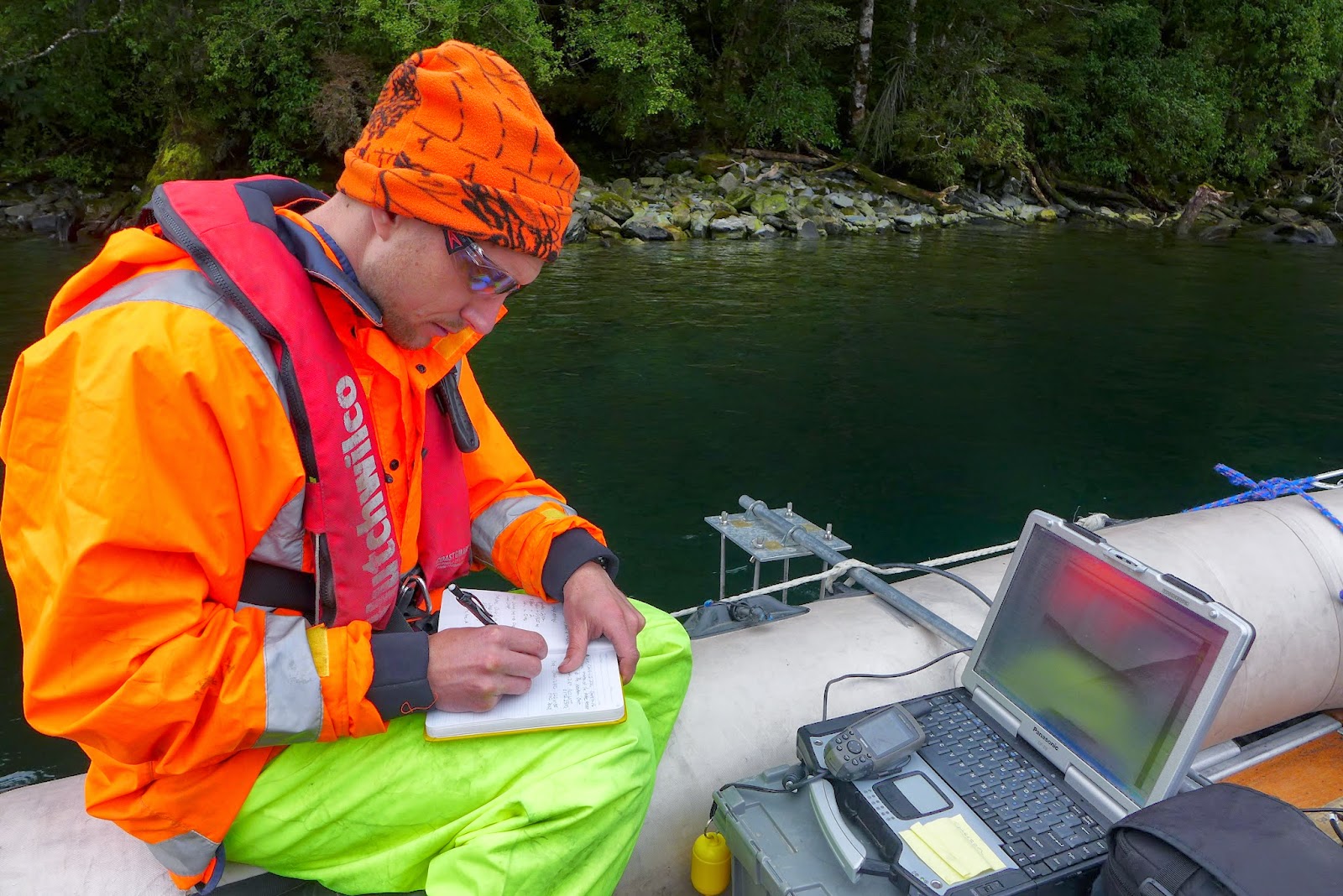 The survey uses an acoustic source that sends pulses down into the water. The boat is towed along so that noise interference produced by a nearby motor is avoided. 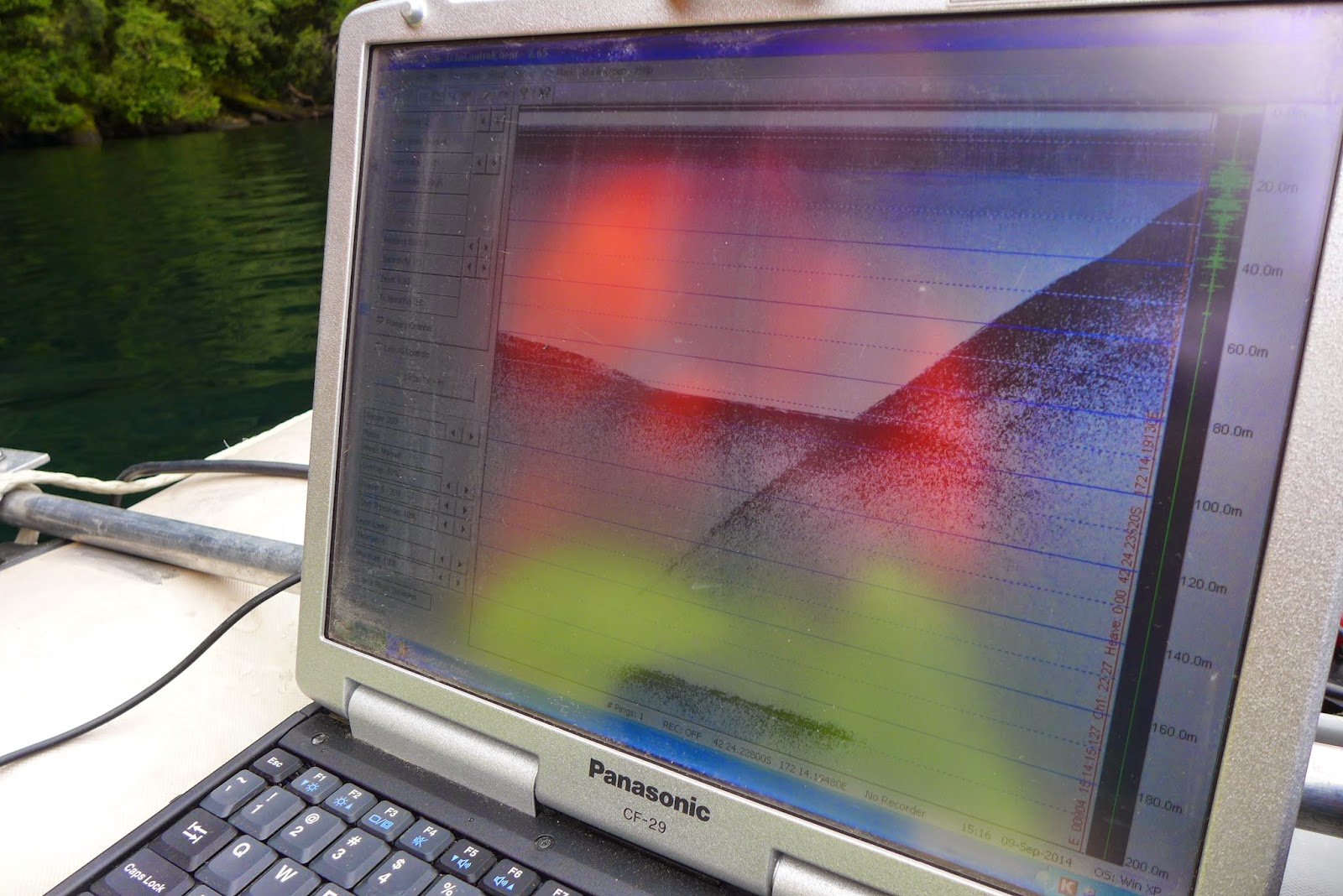 As the sound pulses are reflected back from the lake bed and its layers of underlying sediment, they are translated into a two dimensional vertical section image of the lake floor. A number of survey lines are made across the lake to give some idea of the 3 dimensional structure of the lake sediments. 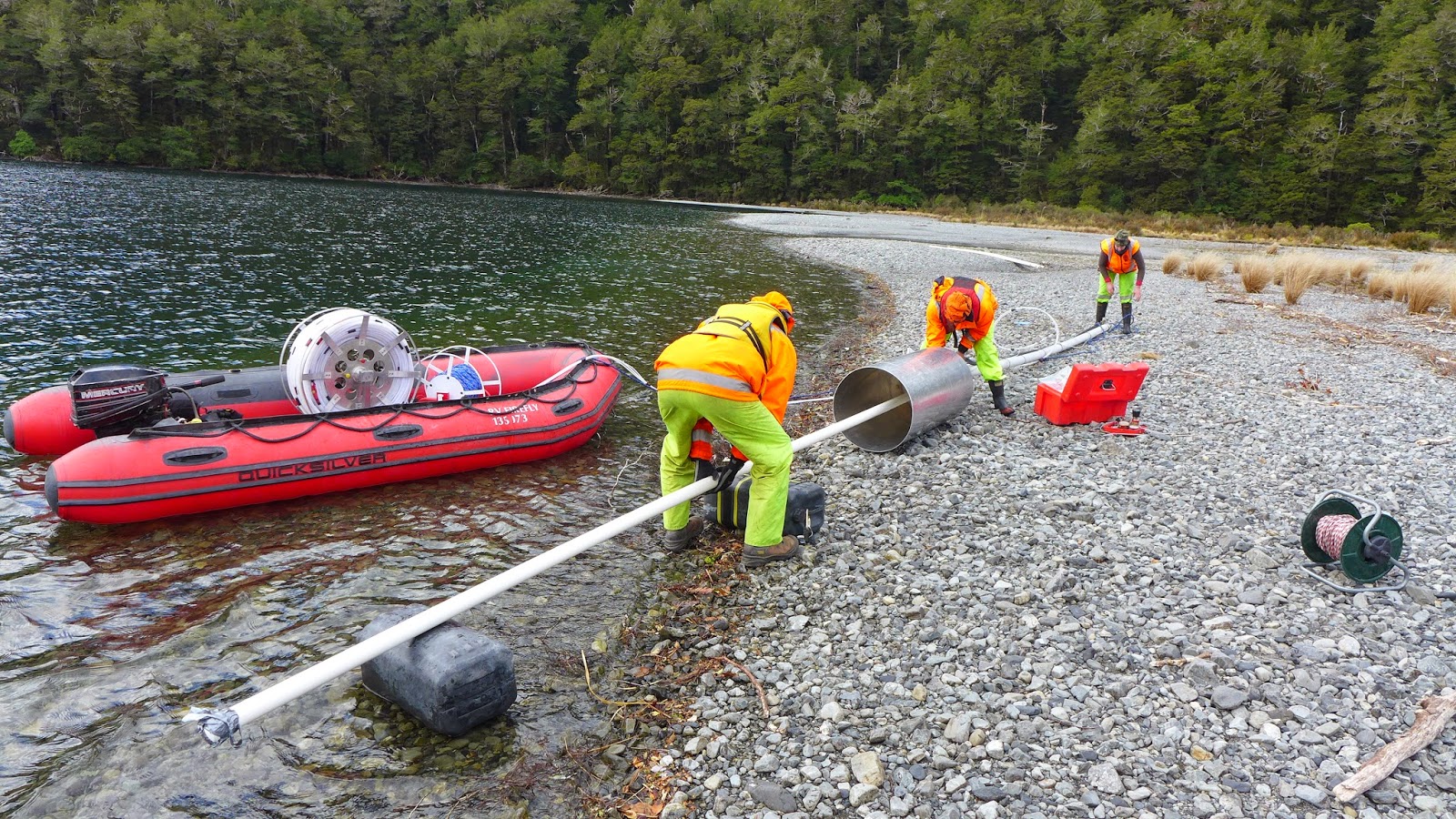 Once the best locations for sampling have been chosen from the survey results, the corer is prepared with a fresh 6 metre pipe that will be pushed into the lake floor to retrieve a sediment core. 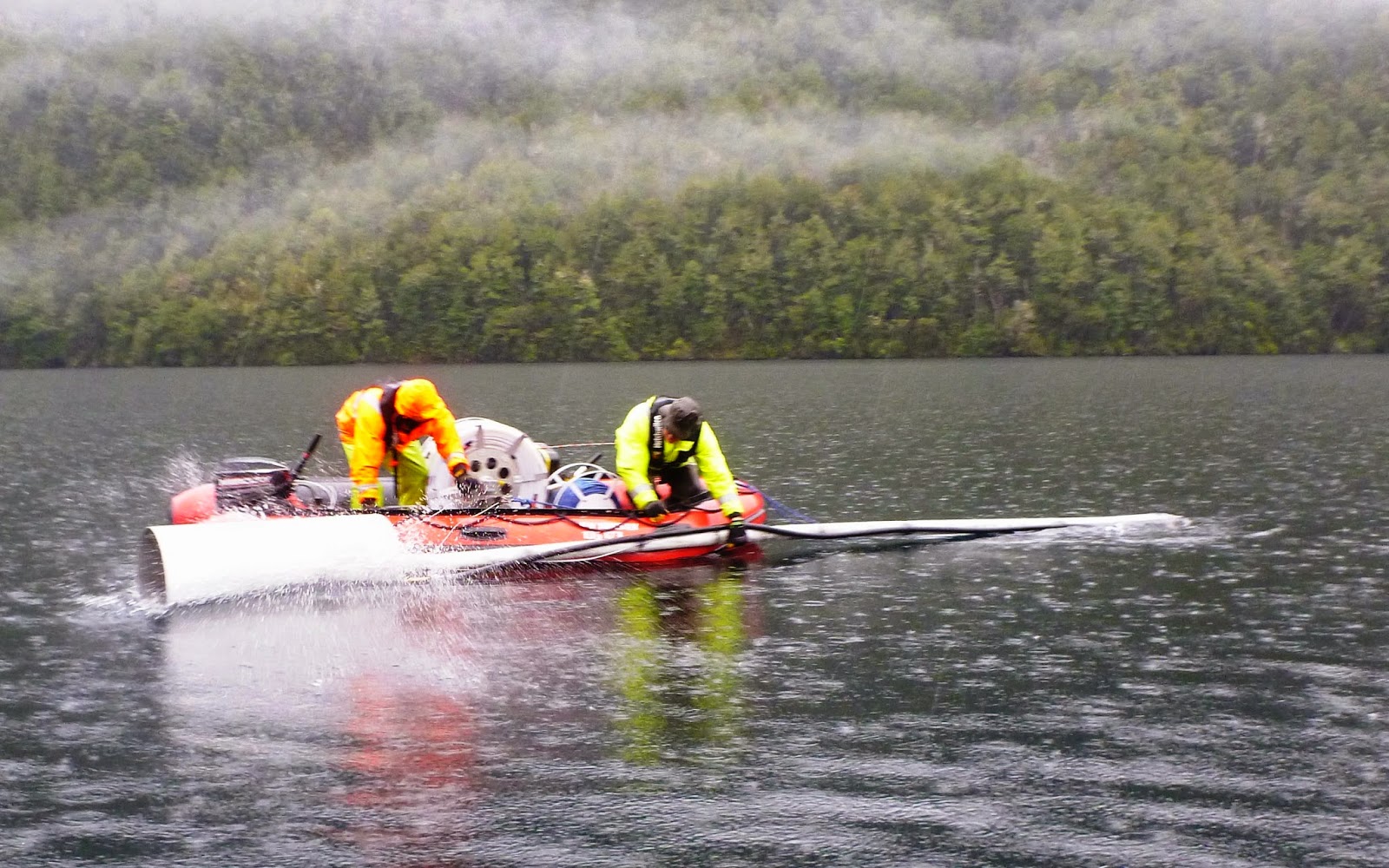 The corer is transported to the chosen point on the lake surface, and then dropped off the side of the boat once it is in position. 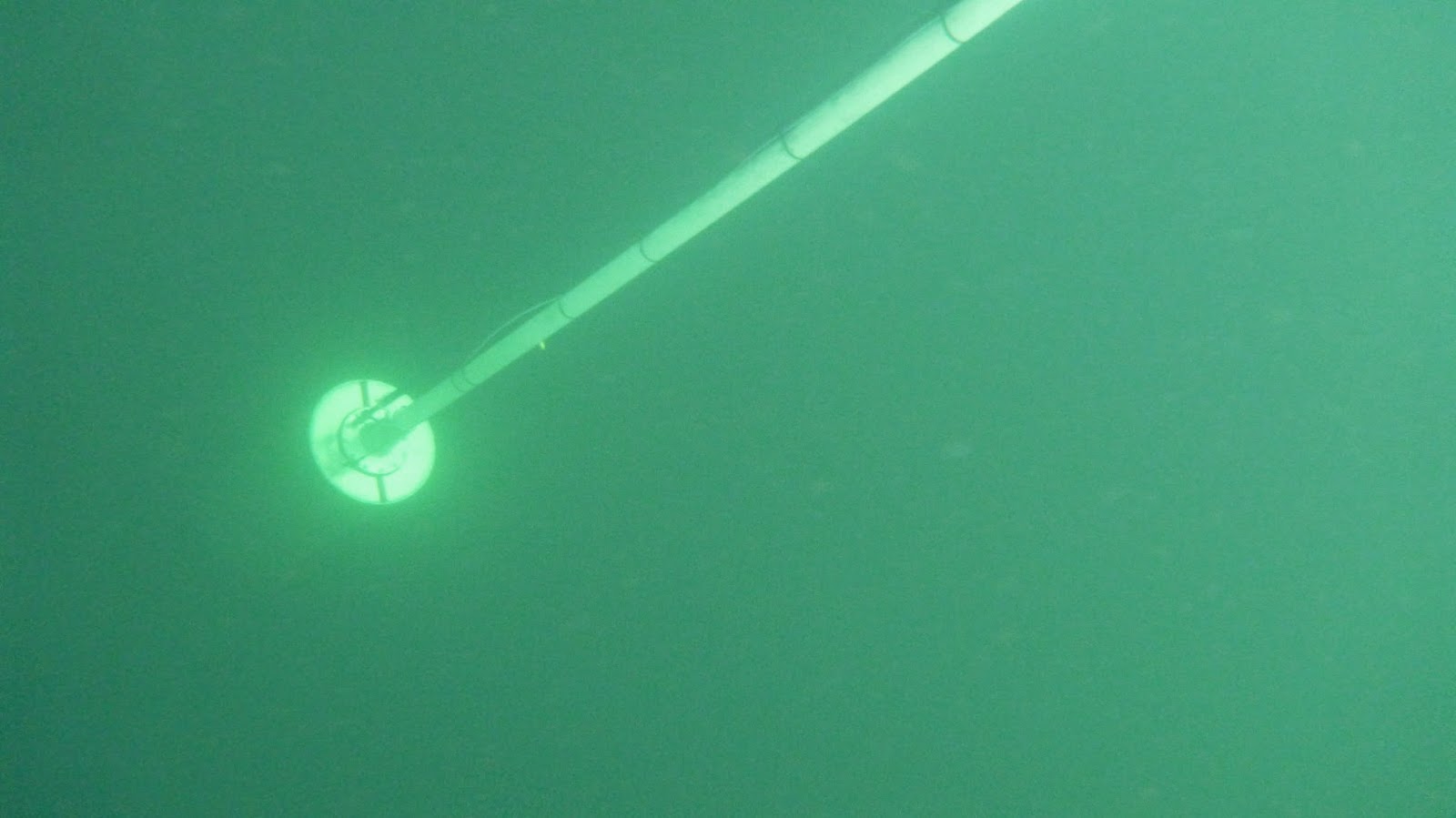 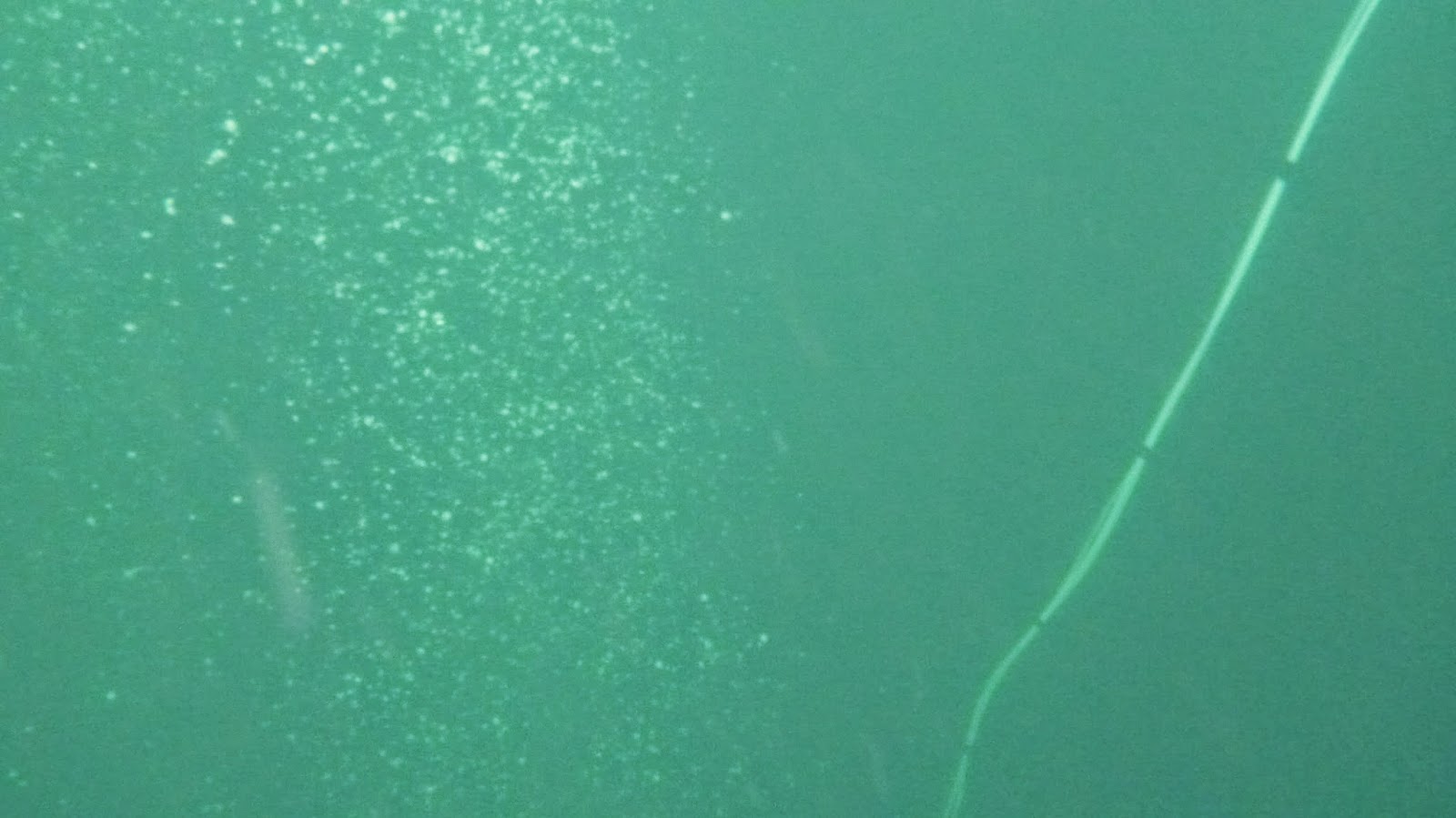 After being connected with several airlines which are required to control the pressure coring process, the corer is lowered the 90 metres to the lake floor. The large barrel sits at the bottom, and is sucked into the mud to create a stable platform for coring.

High pressure air is then applied to the piston which pushes the 6 metre coring pipe into the mud, releasing clouds of bubbles up to the surface. These bubbles allow Sean and Jamie to monitor what is going on with the corer at depth.

When the coring is complete, an airbag is attached to the line and filled up with air so that it  pulls the whole assembly out of the mud. The airbag bursts up to the surface from below in a spectacular fashion.

About a minute later, the corer assembly also emerges from the depths. It is not a good idea to be too close to this as it could easily sink a boat that was in the wrong place. 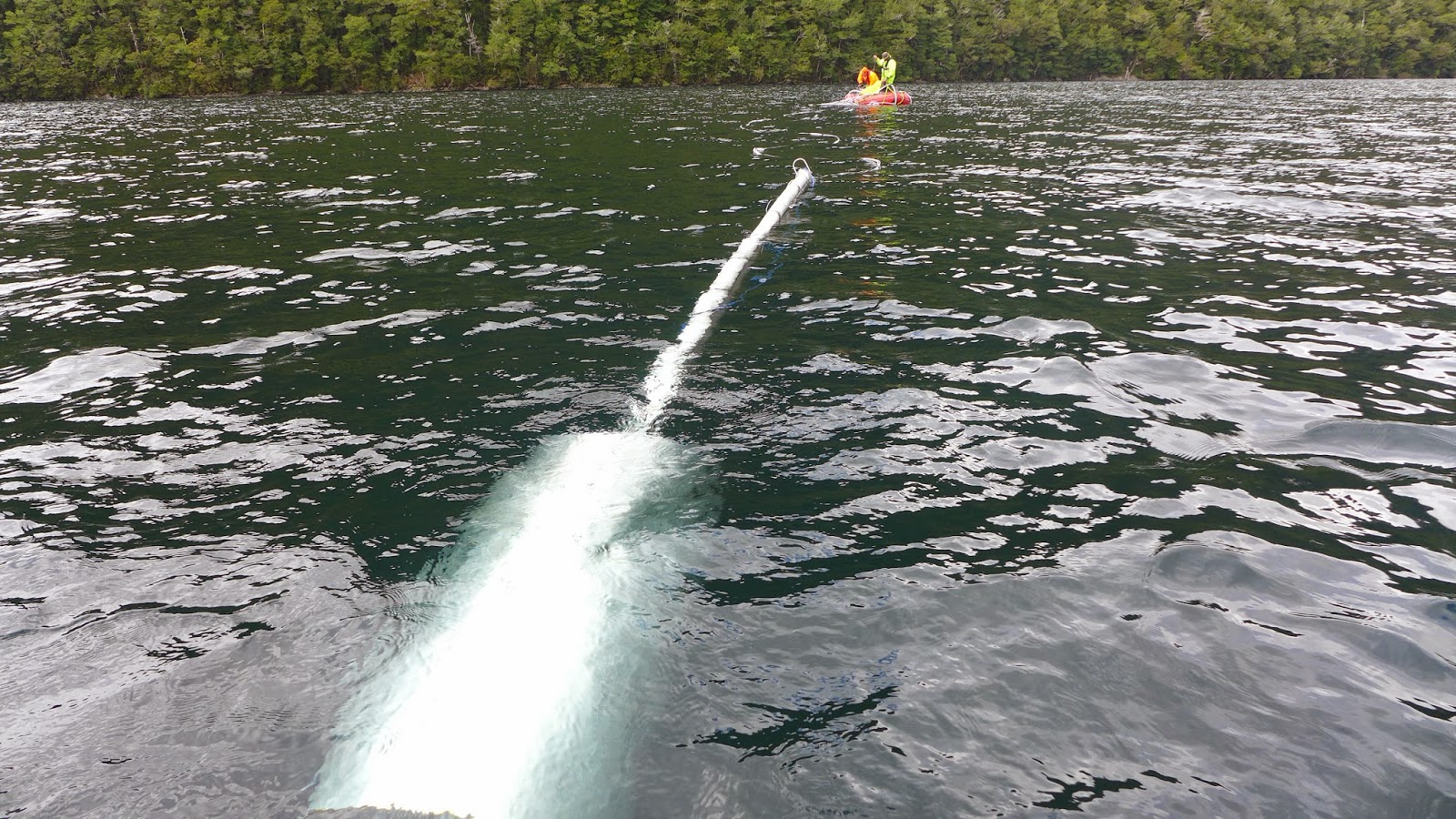 The corer is then plugged and loaded into the boat to be brought back to shore, with its precious cargo of sediment. 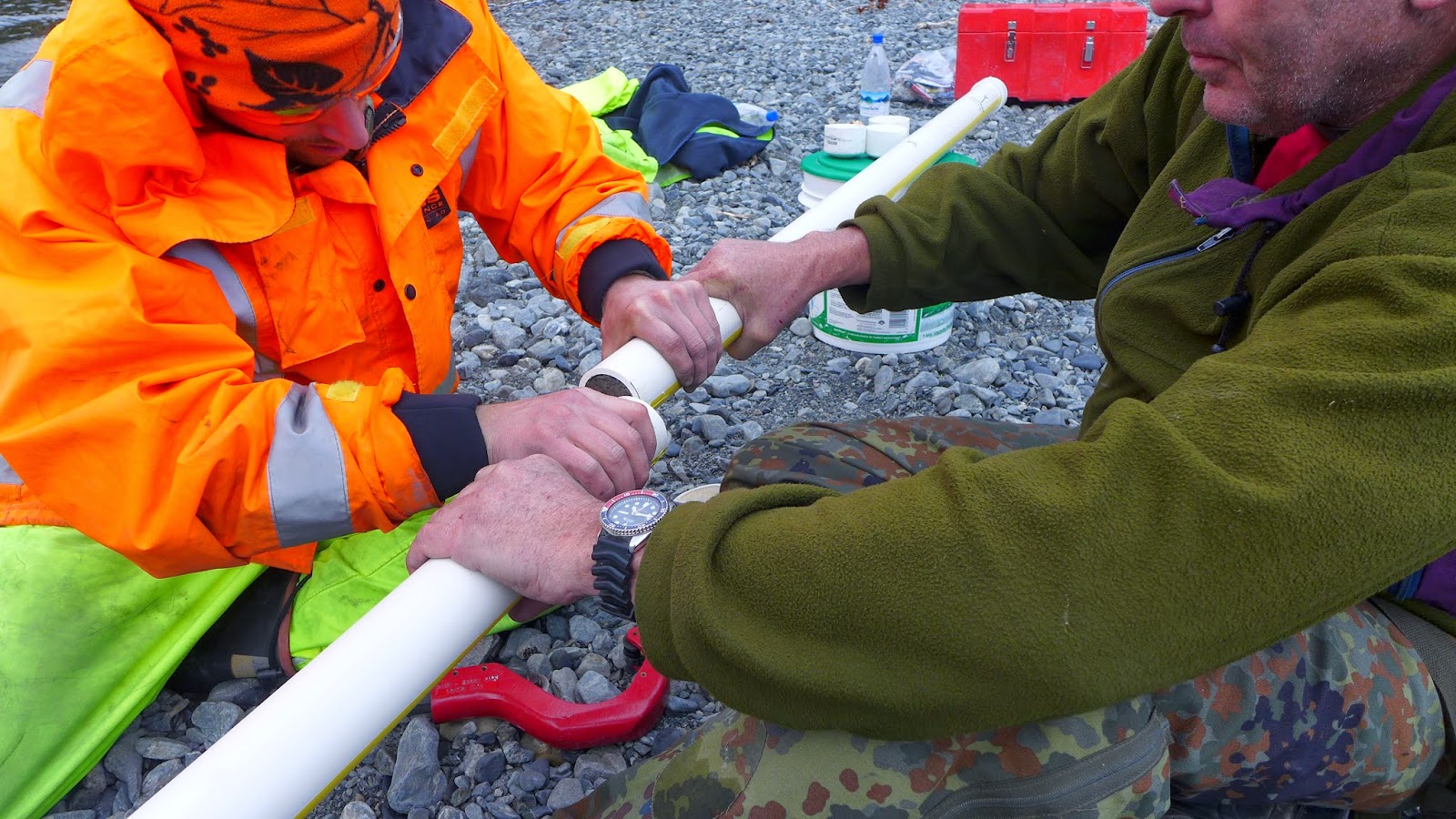 The PVC tube containing the core is then cut into 1.5 metre lengths for ease of transport. Each tube is carefully labelled to avoid any confusion  about where it was taken from and its relationship to the other samples.

Once all the sampling has been completed, the expedition is over. It takes several helicopter loads to transport the two boats, safety gear, corers, generators, samples and all our personal equipment back to the road end. The samples are then taken to Otago University for analysis. My next post will describe how alpine lakes like Lake Christabel have shown themselves to be very useful natural seismometers through this research approach.